Add Images to Your Websites

=Tell us what’s happening:
Not accepting the image code. Picture doesn’t load. Could it be because I’m using an iPad !?!?

You’ve done most things right, but the img tag is a bit different because it doesn’t need a / at the end. It’s just one thing <img> with some extra info inside it, like the link to the image and the alt text.

A bit like you would put a class name inside the first part of a h1 tag <h1 class="name">text</h1>
The img tag doesn’t have that second part.

You’ve done most things right, but the img tag is a bit different because it doesn’t need a / at the end.

This may affect whether you pass the challenge due to how the tests are constructed, but it won’t affect whether the image displays. It’s basically a stylistic thing — it used to be recommended to close empty elements with /> back in the days of XHTML, but the practice is no longer recommended for the modern web.

Hi. According to me, the problem is with the quotes. I have retyped it and change the quotes and it is working properly. Here, I am attaching the screenshot of my output. 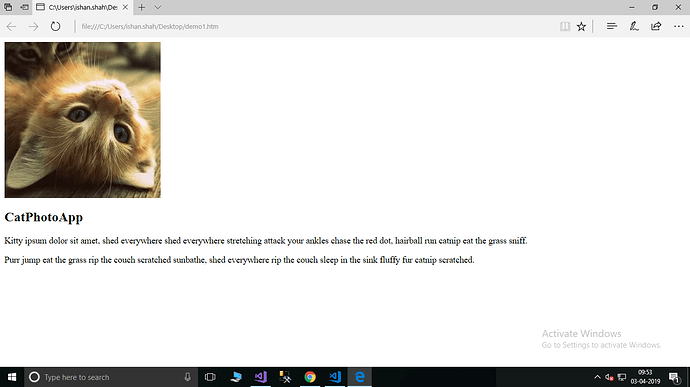