My arrow function doesn’t get approved by JetBrains academy. I don’t understand why.
Image: 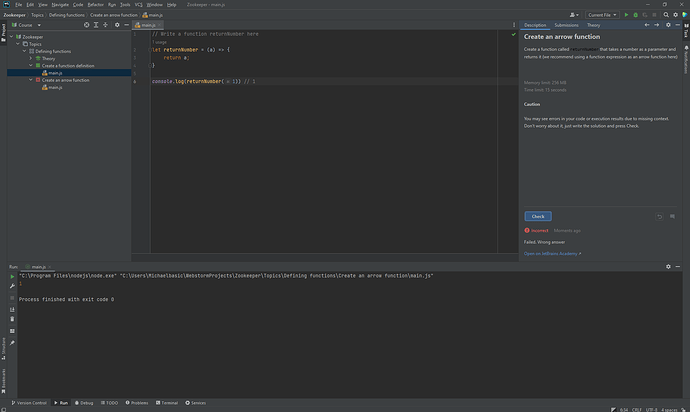 Why is the solution not accepted?

Okay. So I tried this code instead:

It doesn’t get accepted either.

I offer these tips without having any idea about JetBrains Academy or its curriculum or what it’s looking for in your answer.

If it’s looking for a specific way of writing the function rather than just testing its output, then the above may help. Otherwise, I don’t know, skip it. It looks like you understand the concept.

It doesn’t get accepted either.

Okay. So I think I have tried all suggestions from both colinthornton and RandellDawson and the Jetbrains system didn’t accept anything of it. I even created a theory that they are doing “denial of service”.

How do we access this exercise to test for ourselves?

It mentions recommending using a function expression as an arrow function? So maybe:

Though i find that an odd way of doing arrow functions when the point is to trim the syntax down.

Well what you wrote above is not an arrow function.

I already suggested a function expression as an arrow function:

but apparently that is not being accepted.

yeah i realize shortly after i posted lol.

Allright so there was an option to view solutions to the problem and move on. What the system wanted was just a function and nothing else.
So this line of code worked as a solution: let returnNumber = (a) => a;

Thanks everyone who tried to help me!