Very basic survey form to fufil the test requirements for the beta. 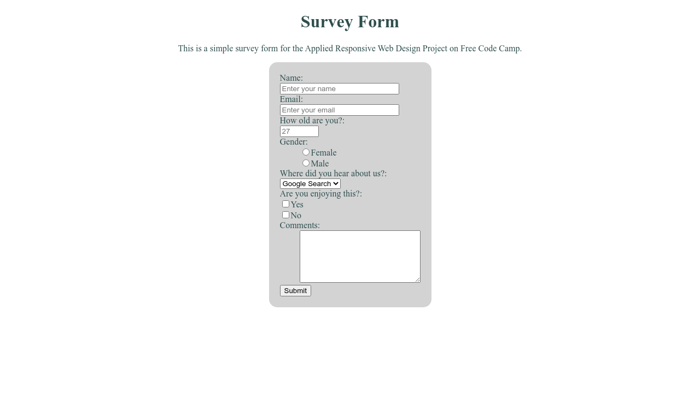 Any feedback is appreciated. Still working on the styling but would like peoples opinions.

there is a point to keep forms basic I think:) looks good for me, and html with comments is clean and easily readable, mine is never like that:smiley:

On a wider screen, it looks a little odd to have everything pushed over to the left side of the grey container.

Why not change remove the grey container’s width property and add text-align:left; and display: inline-block; to it. Also, so that the container remains centered on the page, you should add text-align:center to your body selector.

Thanks, I have made the changes you suggested and it looks miles better.

@angelinalblyth This is a good start.

Here are some of my thoughts:

Overall, this is a good start. Keep up the good work!

Thanks for the input. I didn’t realise I hadn’t matched up the for with id’s, changing that now.

@angelinalblyth IMHO, most of the <div>s in your form are unnecessary, you can simply style your <label>s and <input>s with display: block;.

Also, let me sum up @camper’s points about labels and fieldsets. Take the gender radio button group as an example: What you are trying to do with adding the same ID to both radio buttons so they both match up to the label’s for attribute is invalid because IDs must be unique. Also, the word “Gender” does not play the role of a label to any particular radio button, rather it’s “Female” and “Male” respectively. These words are not being properly associated with their radio buttons when you just place them in the same div.

You will prbably not like the default styling of fieldsets and positioning the legend can be a bit of a challenge. For me this was where HTML and CSS became interesting.

Where did you learn to use drop downs? It isnt taught in FCC is it?

I cant remember off the top of my head if it is or not. Im pretty sure I followed the W3Schools method for datalist