I’m getting correct results for all the criteria in this challenge, but still they are not turning green and I cannot go to the next challenge.

This is the code I wrote:

EDIT: I didn’t check the actual code in the function, once it’s fixed as described in the other answers, you’ll still have this problem:

You have global variables: var arr1=[] and var decoded=""; (there is arr2 as well, but you aren’t using it it would seem).

arr1 and decoded will get larger and larger every test, and each test after the first will fail because they will contain everything that existed prior to the current test.

Move the variables inside the function, that will scope them - they will be assigned every time the function is run, which is what you want. This is an illustration of why global variables tend to be a bad idea, so just be careful about using them in future - you normally don’t want globals, as they tend to be difficult to manage. 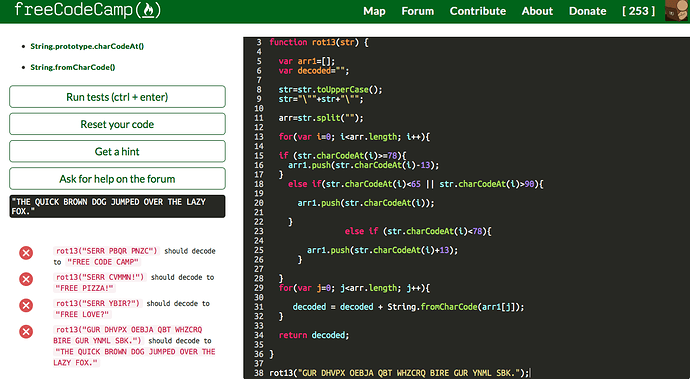 Just remove that line and you will pass it, and one more thing,
same quotes can’t be use in the same one , you need to escape them as below:

I think you are confused with there example test actually they represent string within quotes, it just shows that it should be a string not string within a quote.