…but what is the difference between those two things? I am reading about OOP and the author is making this distinction. He’s saying, “… a program can be conceptually organize around its code or its data.” So around code its process-oriented model and its data its OOP.

It’s hard to say without knowing what the author wrote.

So the data found inside an object.

That’s not enough information. I would need to actually see what was written to understand what the author means. Can you provide the full paragraph?

Yeah, thanks. It seems I cannot copy and past straight from the PDF, but I have a screenshot. 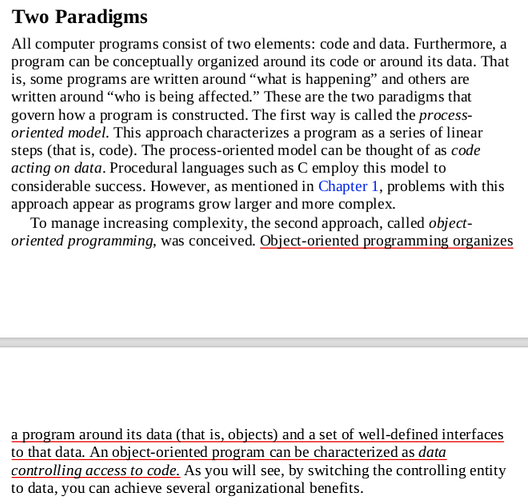 I was able to write some code that made this clear

This is cool, because the condition has only to be changed in the class.

By the way, the book I’m referring to is called: Java The Complete Reference. Schildt, Herbert.

I don’t exactly love the wording the author used, but I see what they mean.

In this context, data is the information, like strings and arrays, and ‘code’ is more the logical steps you want to use to manipulate that data.