Tell us what’s happening:
I’m trying to create a countdown function, but the countdown code isn’t working. I expect my code to work as, for any value for n function should return an array pushing number n through 1

Challenge: Use Recursion to Create a Countdown

thank u very much U r the most active on the forum but can u please help me with my profile lockup err in a bit more detail??

No. You did not format your code. I have done so and added a couple of comments.

Do you have questions about the comments I added in my last post?

can u describe those comments, please?

It isn’n working even after using let

// Only change code below this line

// Only change code above this line

Using let won’t change the problems I commented on.

What part of the comments I added do you understand? It’s hard for me to know what to say unless I understand what you do and don’t know.

how to modify the recursive call?

Are you asking me to do it for you? I most certainly will not do that.

You haven’t told me what you do know, so I am going to assume you do not know anything.

In JavaScript, information is stored in variables. These variables must be declared (at least in the freeCodeCamp editor - there are ways to get JavaScript to automatically declare variables, but they are not ‘best practices’).

To simplify this initial discussion, I will stick to just using let (const is pretty similar and I will mention the differences in due time. var is a mess, so I will not mention it further.).

You declare a variable with let (or const).

Often, we also set the variable to an initial value at the same time, and this is called variable definition.

Broadly speaking, JavaScript has two big types of variables you can declare, primitive variables, and objects.

There are 7 primitive types:

Everything else is an object:

Everything we will say about let is the same for const, except for mutability, which means if and how we can change the contents of the variable.

If we declare a variable with let, the contents can be freely changed.

Next, we need to understand what a function is. A function is a small piece of repeatable code.

There are a few important things to note here:

Now, we have to use the return keyword to pass information from inside our function to outside of our function because of variable scope.

Variables declared with let or const are only in scope (valid) within the nearest set of enclosing {}s.

The same thing with functions:

Now, each time we call, or invoke, or function, the function call has its own scope.

Note that each time we called the function, the contents of arrWithTwo were only based on the data from the current function call. Each function call has its own scope, so no information can be transferred between function calls without using return statements.

You re-declare a each time you call countdown(). This means that every function call to countdown() has a brand new, empty copy of a in its scope.

You never capture the output of your function call here. This means that you are throwing away and ignoring the result of calling this function.

You should only declare the array to hold the countdown numbers once.

You should capture and use the result of your recursive function calls.

It is a common tendency for people to try “how about this?” random debugging. Try using different variable names, adding parentheses here, using different methods, etc. etc., without really knowing what is going on. People should stop doing this. If you don’t understand the cause of the problem, it means there’s misconception or lack of understanding.

When you post a question, it is most beneficial to the poster if the poster explains as fully as possible. Don’t just ask “why my code is not working?” Explain what you’re trying to achieve, e.g., I’m calling a function here and expecting to get the return value of such and such, and I’m trying to add x to it. But somehow, I couldn’t add x to it. I say beneficial to the poster because trying to explain oneself is a very good learning experience and the explanation from the poster allows those who reply to answer precisely and concisely.

I’m not sure at this point if it helps, but it might. So here’s the illustration on how the flow (sequence of function calls and return values) of the recursive function. If you want the answer to be [n, n-1, . . . , 1], then instead of concat in Step 2, use unshift to add a value to the front of returned array. 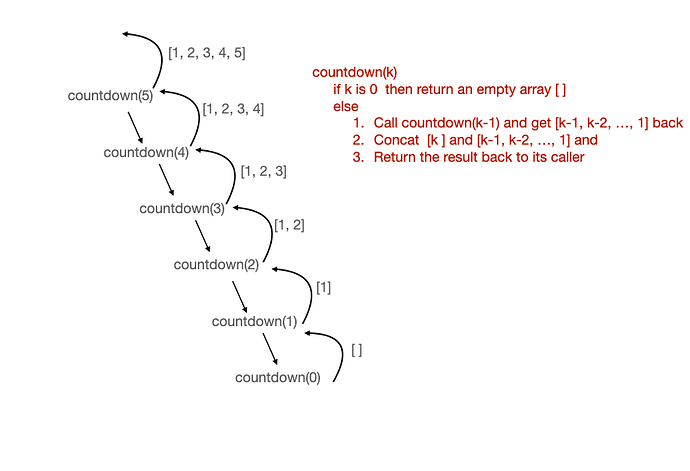