I’m currently working on the first of the Responsive Web Design certification projects. I’m wanting to be a little fancy with how I design the tribute page, and I’m trying to figure out the best way to achieve my desired effect.

I’m looking for an overlapping effect similar to the z-index example from the course: 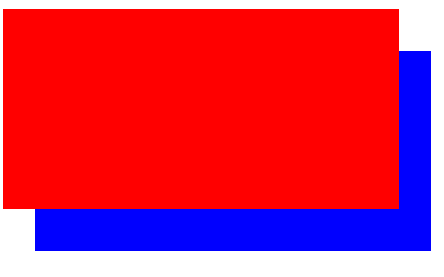 I’m wanting to do that, but with my H1 element.

How should I go about doing this? I was going to set three H1 elements and give them different z-index values and change their position, but figured I would have two problems:

What do you all think?

I’d consider wrapping them up in an enclosing element (div / article) and then setting the H1 position to absolute within that. Also, you may be interested in the CSS text-shadow effect. Happy Coding

I don’t think text-shadow is necessarily what I want. Unless I’m just not understanding everything text-shadow can do?

The example I provided isn’t an approximation more suited to a text-shadow effect. I want literally the offset effect you see with those two boxes, repeated twice, instead of repeated one time like in the example.

I agree. Wrapping the h1 inside a div/section probably it’s the easiest option and consider the correct use of position relative/absolute.

If the words you want to display are the same, you can create two text-shadows for the same element using a comma to separate them. Like this:

Okay. I will try that out and if I have any other questions I will ask after I’ve tried a few ways. Thanks for all of your help guys.

Also, yes, I agree the div solution is obvious @francisco_1994 and I should have thought of that before asking