Elements not showing up as inline

Made some good progress with this little project. I have two methods for checking each input to see if the value is 0. If they are zero when the button is clicked then the functions create a span element and display the error. I set the paragraph to inline so the span will be on the same line as “Number of people” and “Bill”. For some reason though the Number of people span does not want to sit inline with the Number of people text. However, my bill span sits perfectly inline. I tried messing with the spacing, but it does not want to move. 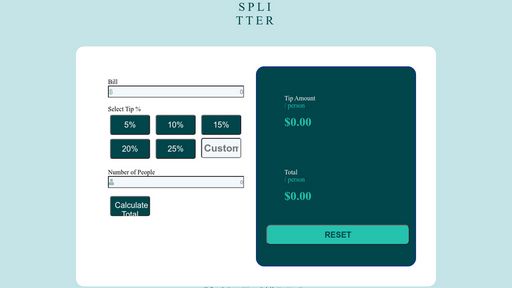 You have a <div> wrapper around two elements <p> (which actually should be <label>) and <input> and they’re displayed in a column (default for div). Then you’re adding a <span> and now you want for elements to show in 2 dimensions. You could achieve it by adding some specific padding/margin values, but that wouldn’t be the best approach because your layout will break easily.

I would change layout with <span> being already there and only changing it’s text content (or visibility).

I did think about that. Using innerHTML like I do with the total/per person and tip/per person. I guess it would be a better way to go, because right now im checking to see if a span exists and if it does not then it creates that span. That would let me get rid of the checks, and clean up the js a little

Doing reset by just removing all <span> elements is a very bad idea.

Why would this be bad?

Of course here it doesn’t matter, but: