What would be cool to add:

I’d be totally stoked if someone actually enjoys playing this:P

Messages kinda spam if you perform a lot of actions at once. A cool trick would be to load the text into a queue and display them on a timeout so they don’t show up all at once.

It’s fun though, perhaps too easy for aroguelike, but I like it, good UI design, really good, it’s not in the way.

Sometimes it’s easier to point out problems than everything you did right.

Nice minimap. The healbars being represented by not just a bar but the dashes is really cool.

That’s cool but, Is the LK beatable? I try it during 15 minutes without dying and can’t beat it with the last weapon? 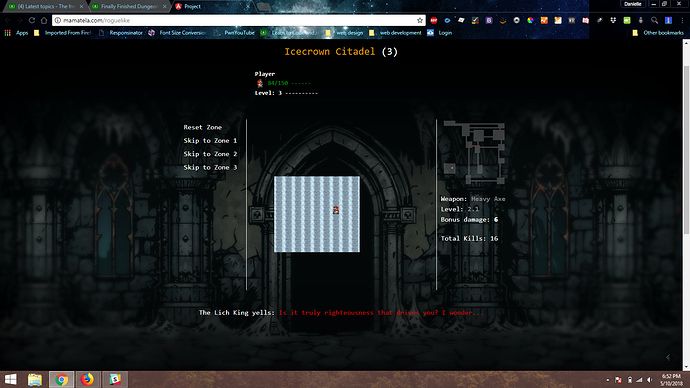 It seems Arthas has trapped me in an inescapable box haha. This happened after I used the green warp portal in zone 2 by the way. I’m guessing it’s something to do with the random level generation? I just hit Skip to Zone 3 and it fixed it.

Awesome crawler, well done! Loved the mini map, loved the combat text, the fact that the floors themselves are random is really cool (getting trapped aside

) and adds a lot of replay value.

I think the only major thing I would have preferred is if the play area itself was bigger, everything is just really tiny. And I agree adding some sound effects would be great.

Now I’m off to enjoy my final quest reward

@Emgo-Dev
Thanks for your feedback! I agree, the text can be a bit too much. I’ll also consider increasing monster damage a little bit, I made all of game balance variables configurable in a separate place to calibrate as I get feedback.

@Brandysve
Yes, you need a little bit of luck but you can beat em pretty easily. By the way did The Doomhammer drop for you? It’s really rare

@dlyons
Haha sorry about that. It happens occasionally and I thought I’d get a way with it :D. You can always “reset the zone” if that happens.
Would you prefer a larger board (viewport) that shows more map space or a larger map with more rooms and stuff? Or both? I could actually let players adjust these values

@mamatela Yeah I had the Doomhammer but that was not enough

That’s okay! At first I thought it might be like part of the game where the LK traps me in a room and taunts me and then lets me out to come face him. And then I began to think something was wrong when the trash talk started looping hahah. But no big, you’re dealing with randomness after all, random things will happen.

Yes definitely a larger viewport/zoomed in on the map itself, I found myself squinting and getting closer to my screen to see things.
Although I wouldn’t scoff at more rooms and stuff either, especially if it’s adjustable.