Has anyone switched from OS X to linux?

Just keep in mind that Pop_OS! is a newer distro/spin and a lot of the effort behind it is to get it running well on their (system76) machines. For the OP I would recommend running Ubuntu as it has probably the easiest learning curve with the largest community. Run 16.04LTS on your Thinkpad and call it a day. I currently run both MacOS on 13" MBP and Arch Linux on a Thinkpad T460. If I were stuck on an island and could only have one it would be the T460 hands down. I may not own the MBP if it weren’t for native iOS. That being said I love the iMessage integration, the screen is gorgeous, and IMHO there is not anything on the market in any way that comes close to the trackpad user experience of my MBP. Now I run i3wm on the Thinkpad, so I’m not as worried about the… decent trackpad. I use the trackpoint more and keyboard bindings on again IMHO what is the best keyboard on any laptop on the market. Thinkpads are extremely linux friendly and the computer is lightning fast. It’s almost like two different worlds. I use VS Code, and iTerm with the built in apps on MacOS. I use vim, ranger, and termite on Arch. I unfortunately found that choosing both was the solution for me.

I asked POP support what the difference between POP and Ubuntu was; their explanation helped a lot:

POP OS and Ubuntu are largely the same at this point except for some theme changes and minor refinements but, the bigger picture offers a lot of context in explaining what POP is. Basically, Canonical announced that it will be realigning its resources with its most profitable streams, which is generally IOT and mobile. When they announced this they also announced the discontinuation of Unity. With all of that said, the Ubuntu desktop is very important to S76 and we decided to run, maintain and support our own version of the Ubuntu Desktop, which is POP OS. So for now, the two OSes are very similar. All of the same packages and tools are available in both. Moving forward though, there is a lot of uncertainty as to what will happen with Ubuntu next, and as such, we offer POP OS. – Mitch

I use Linux at home (Arch/Antergos) and OSx at work. Linux is fantastic for development, haven’t had too many issues in that regard, for CLI tooling, it’s phenomenal. That being said, overall, Linux (any distro) is going to be ugly as sin; lots of stuff feels half done, things break relatively often, lots of stuff is deeply user-unfriendly. Surprisingly enough, there is a visible difference between stuff created by single devs for free and stuff created by teams with $multi-million budgets at a $multi-billion company. Build quality + integration between soft/hardware us in most cases, [natch] miles better on Mac than Linux, you get what you pay for, and bar the Dell XPS machines I don’t really see much competition in that regard.

tl/dr, Linux is a cheap, pig-ugly tank of an OS that will, with constant, careful tweaking by someone who really knows what they’re doing, smash its way through any problem you throw at it… OSX is an elegant, super-expensive combination of hardware and software that generally works very well; works for similar things Linux excels at, plus graphics/creative stuff that Linux generally does not excel at, but can’t be altered at a root level or tweaked like linux can.

The latest Photoshop works on Linux, it’s great for designers/photographers/webdevs.
MS Office 10/13 should works too, plus LO still available.

I love Linux because open source and much more universally design than OSX. You can’t install OSX everywhere without ass-breaking experience. 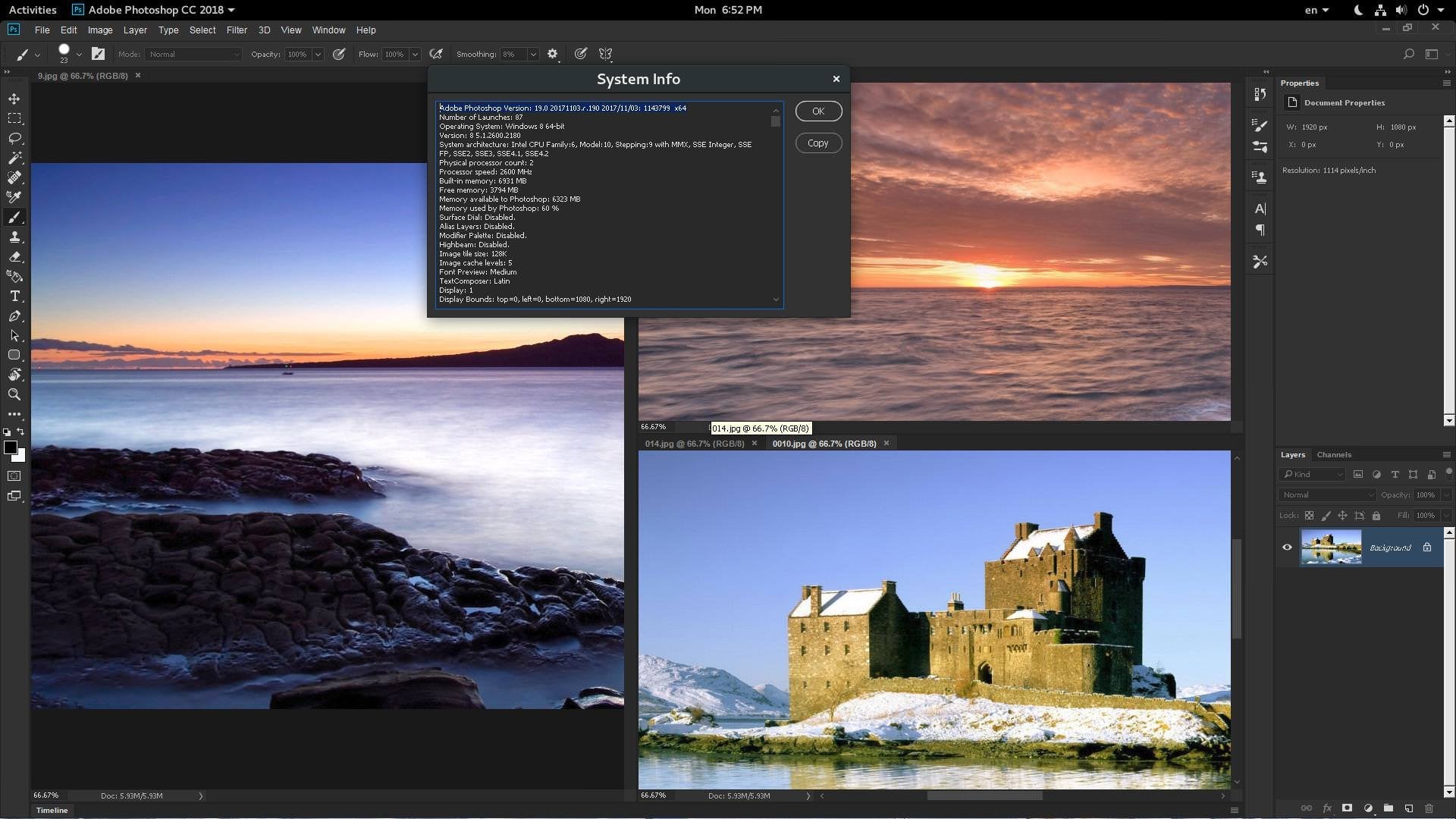 r/linux - The Screenshots of Photoshop CC 2018 64bit on Linux

OH LOL, you never heard about KVM and VirtualBox?

I use OS X for almost 99% of my stuff but I was a linux user for a long period of time… and I still use it sometimes for some specific stuff.

I’ve been very curious about this PopOS distro before, but never actually tried it! Thanks people for sharing your thoughts.

Actually, I saw a link today that fits very nice with this topic, it shows…

… and it points Debian as the best Distro for programming. 2020 is here I think some of you might have boarded the Linux train in the recent past. While the world of Linux does offer tons of choice, it might get overwhelming at first. That's why we've prepared this guide to help you select the best Linux...

That’s really impressive, and that post also illustrates, in a nutshell, the problem with Linux and usability.

I’ve used Virtual Box many years ago. It was crap.
Never heard/used of KVM. Probably crap too.

A few years ago, I’ve been alternating between VMWare and Parallels as they leapfrog each other in performance and features. Now, I’ve stuck with Parallels.

The “many years ago” experience is ugly by default because a lot of things is changing everyday in IT.

VMWare works in Linux without any problem too.

Wow, that’s not a biased statement at all. You should let Amazon and Google know that the KVM hypervisor is crap.

I was Mac like very for a long time, and I still am, but I can’t afford a powerful Mac, so I switched to a PC and hated windows so I got Linux. I suggest you try out Manjaro, it’s much better suited for a developer. I bought an XPS 15, the closest ur gonna get to Mac build quality, design, and trackpad. I’m using manjaro gnome and I have setup that very similar to Mac and makes me feel at home. If u want to know my setup, my extensions, themes and stuff that make my Linux become basically Mac please contact me at arthurfaj@gmail.com

Why not try Hackintosh? I hope it’d save a lot bucks. Just make sure to build your own custom machine.

Id be worried about maintaining a hackintosh. How stable is a hackintosh laptop in late 2019?

Really unstable: it may well work, and work quite well if you build it right, but be prepared for it to break a lot, random things to just not function, and for it to be very difficult to find and implement fixes for things that break. You would be running something that is not supported (actively so, as it goes against Apple’s ToS), and you need to rely entirely on contributions of enthusiasts.

@jastuccio I think you should have tried another distro such as Linux Mint. It is super easy. It installs in five minutes. After installing a few of your favorite programs you should be all set. Linux is worth knowing, the command line is powerful, you can use one CD to install on one computer or 1000 computers. How much would that be if you used Mac? You can use Linux on you desktop, laptop, server, router, and more. It is very flexible. Pop_OS might not have been the right distro. I would go for one of the major Linux distros that have been around for a while. You may have more luck.

I’ve been using Manjaro for about 2 years, and have been very happy with it. I have all the tools I need for web dev running natively, without WINE.

Why spend so much time on Google? Isn’t there a Pop forum you can get quick answers to?
The biggest issue people have switching to Linux is expecting it to work and have a workflow exactly the same way as what they are used to. For many things stuff does work after install, whereas others, such as printers, may take a bit of figuring out.

You can choose from a range of desktop environments, from simple to sleek. So, Linux is not ugly as commented above. Besides, you can configure many things to appear as you want them to.