How can function() work if it was never defined

Compare Scopes of the var and let Keywords course from ES6

An example shows the difference between let and var: 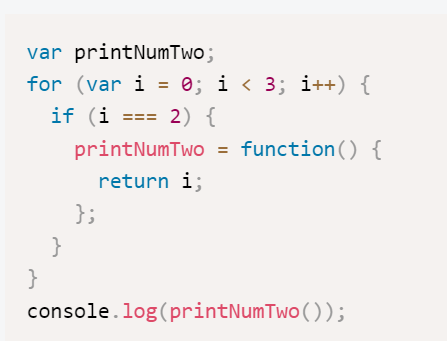 ! i didnt even know we could name a function, function()

That function is defined on the same line that’s assigning it printNumTwo name. The name of the function itself isn’t function(), but rather it doesn’t have name when it’s defined. Sometimes such functions are called annonymous functions, because they don’t have their own name.

It’s in a function, return is how you get a value out of a function.

example1 and example2 are examples of defining functions in JavaScript

! i didnt even know we could name a function, function()

You can’t name anything function, it’s a keyword that denotes a function.