Yes, I will run the commands in the installing node.js and npm section in Ubuntu terminal 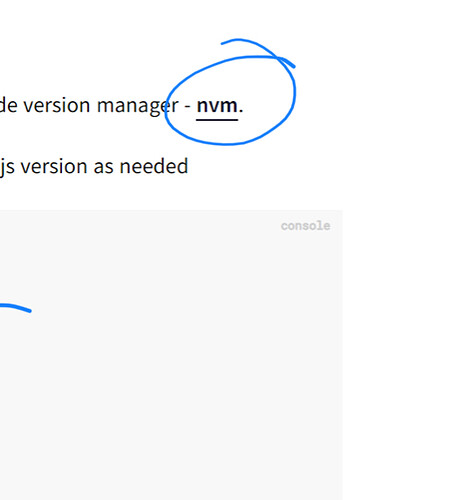 It brings to the nvm documentation

you already said that.

I already did this step: install mongodb docker hub
its not recognizing
mongod
in ubuntu terminal. it say I can install using:
sudo apt install mongodb-server-core

should I perform the same step again | do what terminal says | do something else? 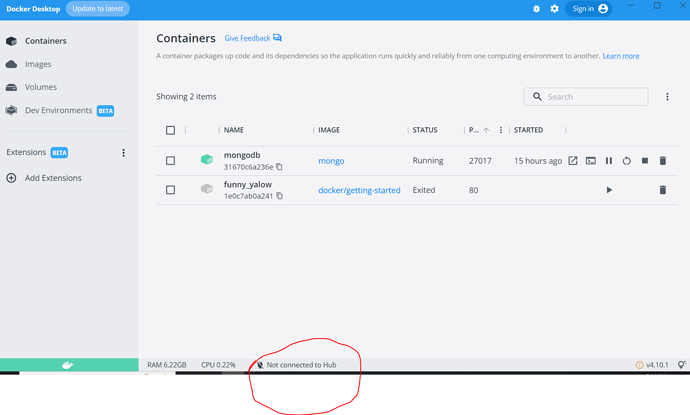 though I can open it if I click the terminal icon in its instance in docker desktop. is this what it needs: 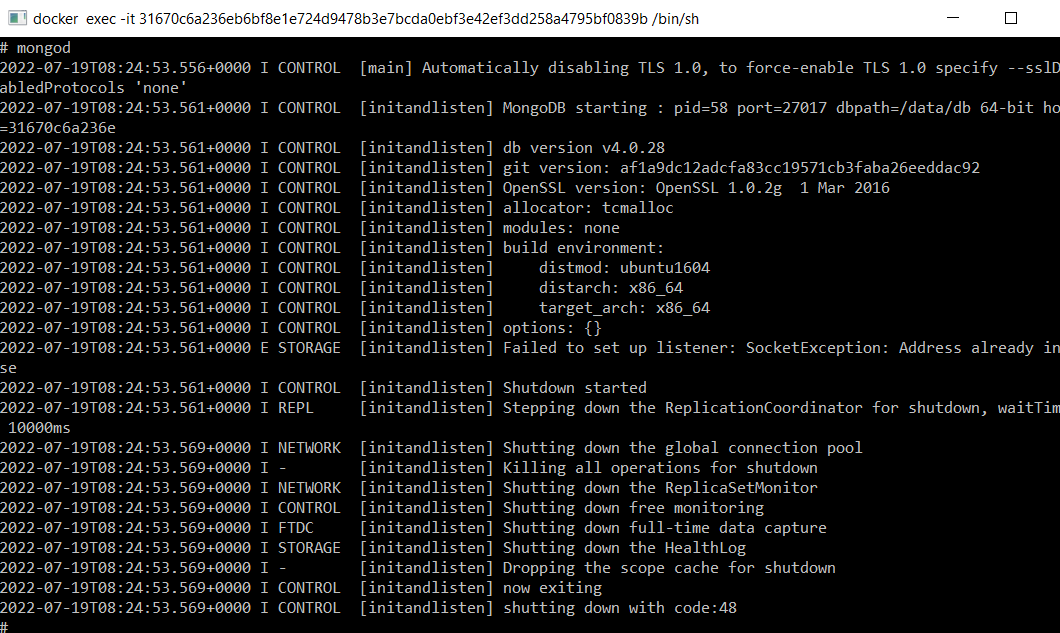 I think its working.

I was at this step: 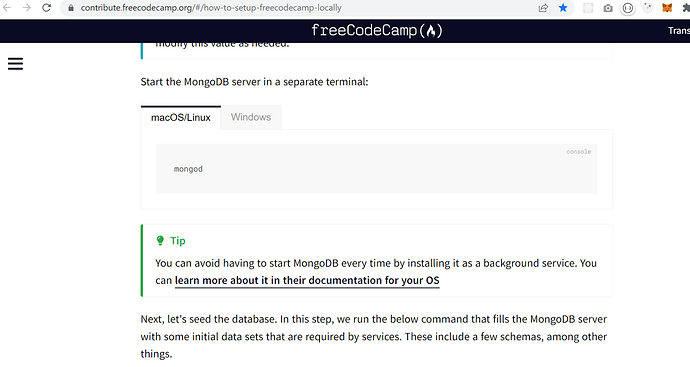 I was expecting that command to work in an ubuntu terminal. It does not, I have to open a terminal from docker desktop by clicking the terminal icon of its respective container re:

I will proceed, thank you.

If you open localhost/8000, will you see freecodecamp home page?

If you open localhost/8000 will you see freecodecamp home page?

Yeah but I cant sign in with a real user, only developmentUser. Perhaps the guide will explain. I can proceed, thank you.

developmentUser is the user preloaded in the database, locally you don’t have access to the live database

If you open localhost/8000, will you see freecodecamp home page?

developmentUser is the user preloaded in the database

Its not working anymore.

as I had mentioned previously the command mongod does not work in Ubuntu terminal, what I had done at the time to get it working is click on the open terminal icon in docker desktop next to the process, it opened its own terminal docker exec:

currently, the terminal icon I had previously used to open docker exec terminal and start mongo is no longer avaialble in docker desktop it keeps trying to restart itself unsuccessfully:

What do I need to do to get it working again? do I have to install the community as the document is suggesting in the “Tip”?

Are you using a custom Mongodb configuration?

No I have followed the steps here first:
https://contribute.freecodecamp.org/#/how-to-setup-wsl

followed by the steps here:
https://contribute.freecodecamp.org/#/how-to-setup-freecodecamp-locally

I was able to get until here working yesterday:
https://contribute.freecodecamp.org/#/how-to-setup-freecodecamp-locally?id=step-4-start-the-freecodecamp-client-application-and-api-server

but now it does not work

Are you using a custom Mongodb configuration?

this is what I did the other day per the document:
https://contribute.freecodecamp.org/#/how-to-setup-wsl?id=install-mongodb-from-docker-hub

I can try to delete the mongodb container in the docker hub and run the above step again, maybe it will fix it.

I can confirm the solution for those having the same issue is the following;

you are seeing the container trying to restart unsuccessfully:

I think, this is a good info to bring in GitHub issue, we can update the document with the issue and how you fixed it.

Mention you want to work on it if you want to, so when other moderators finish the triage of the issue, they will label it help wanted.

now Im stuck “push your main branch to your origin” : 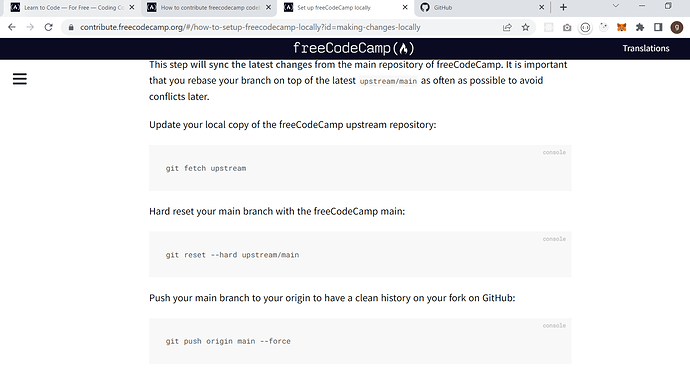 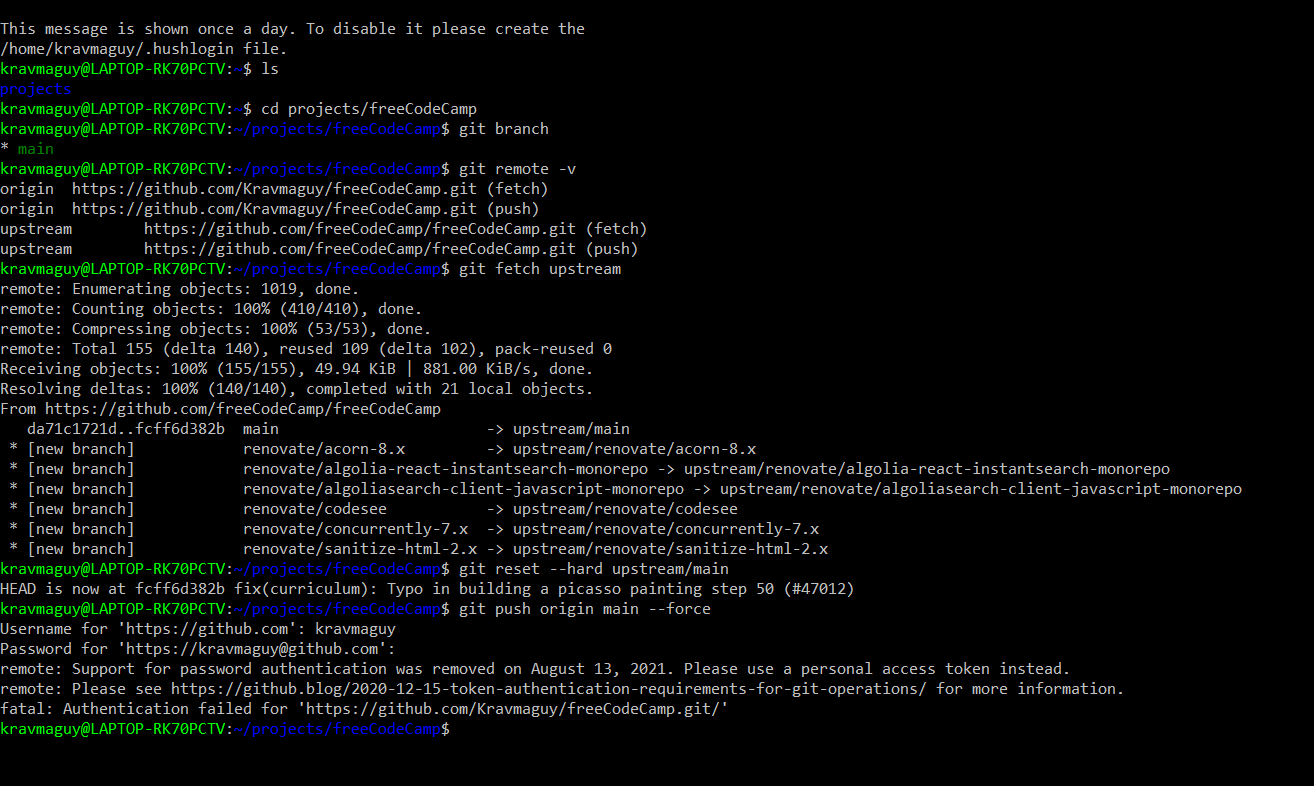 there is a github link in the output and what google says to do that I think will resolve this:

Im not sure if its related but the freecodecamp wsl documentation says this yet specifies that its only a recommended option, and not a necessity:

When you are promoted your password, use PAT instead

I have edited, your post to remove the photo with your email, because the possibility of you getting spammed but this may be me overthinking it

Im expecting it to teach me full stack with user authentication. There is three exercises that speak very briefly about social authentication… (implementation social auth 1,2,3) yet none of the quality assurance projects require it… I realize its extensive and you can use different services for this (auth0 etc…), this is why I think the curriculum itself is good but must be supplemented by contributing to the open source project