How to practice Javascript

Tell us what’s happening:
Describe your issue in detail here.
After reading the lesson it lets you practice on the right side of the page. I don’t understand how it works. How do I know if something is right? On the bottom where it says " running test" is there something that is supposed to go in that box? How many times do I try to get the answer right before I am able to move on?

Hey there! Welcome to the forums

If your code is correct there will be no error message in the console and a pop up will come up offering you to move on.

It looks like they are just wanting you to declare an empty variable name myName.

How do you think you would do this?

You can play around in that code editor to get familiar and practice, but if you read the challenge again carefully, you’ll see that at the end there are specific requirements for what you are supposed to do.
In this case:

Use the var keyword to create a variable called myName .

Below that will be a description of all the tests that will be run. When you run the tests, every test will have a pass or fail mark (a

). In this case there is only one test:

You should declare myName with the var keyword, ending with a semicolon

Thank you! Then after I do this it will allow me to move forward?

But that is incorrect.

the directions only want you to declare the variable myName.
Not assign a value to it like Peaches.

I did this before your response. Which one would be correct? Also some turn out green and some turn out blue. What does that mean?

What happened when you tried the last one in your list and hit Run the Tests?
Do you get a popup like this? 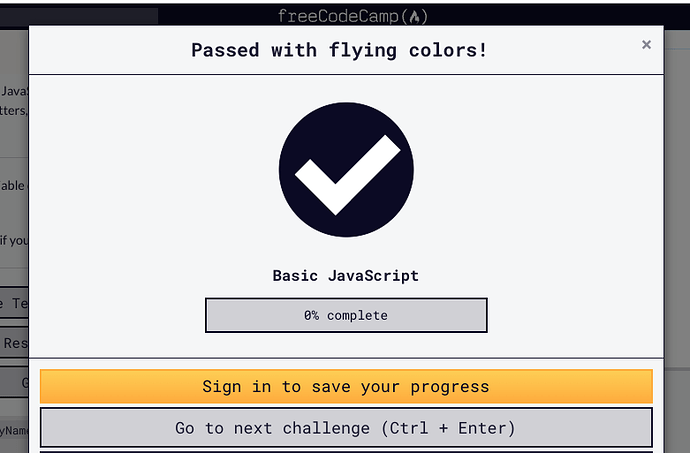 Nothing happened I’m on the same page. That’s why I think I’m doing something wrong.

I am testing everything on Google Chrome without extensions and when I use var myName; and hit run tests it passes for me.

I did that before and it worked, that’s how I got to the second step (where I’m stuck now) but I’ll try that.

What is your complete current code? You might want to reset the challenge and start fresh.