I Think Something is wrong [BUG] 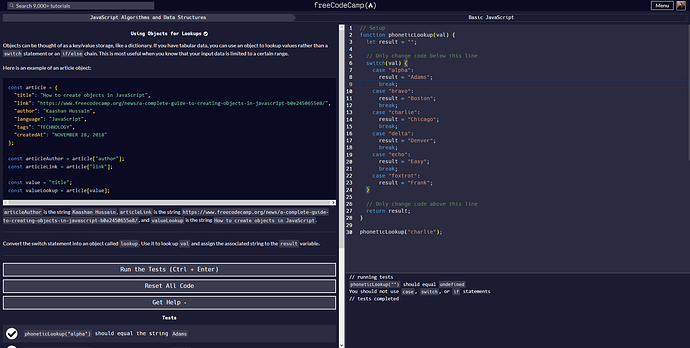 Using objects for lookups (Link above)

I had this practice before and i think its different than before. It was a switch test with alpha beta delta… values before but now its mashed up with a lookup test. I put the screenshot above . I dont know if its about my browser but i thought it would be nice to report it

I had this practice before and i think its different than before.

Yes, some of the ideas get reused. Why is that an issue?

RIght, before they use those to teach you how switch works. Now you are learning how to change a switch to an object lookup - sometimes you need to do that in coding.

Looking at the image you posted (in the future, please post the code, not pictures of code) it looks exactly as I would expect it to. The issue is that the challenge hasn’t been solved - it is still using switch.

There’s nothing wrong with this. They are using a similar block of code to teach a new concept.

Dont forgot the rule — Don’s use Switch, case, if statements.
So Create a function and then assign all values to it.
use below code

Thank you for your enthusiasm, but please don’t give away the answers to the curriculum - let them get the benefit of figuring it out on their own.

Thanks for the replies, my bad i must be confused

Thank you sir, I tried to remove the post but I think only moderators have the permission for removing post.

I assume you are a moderator, it would be wonderful if you remove my post and I will be more careful next time when posting something

I usually don’t like removing things unless they are a violation of TOU. Don’t worry about it, it happens. This will just fade into the mists of time.