I am having some inconsistencies in whether my code passes for the RPS project. Here are some examples: 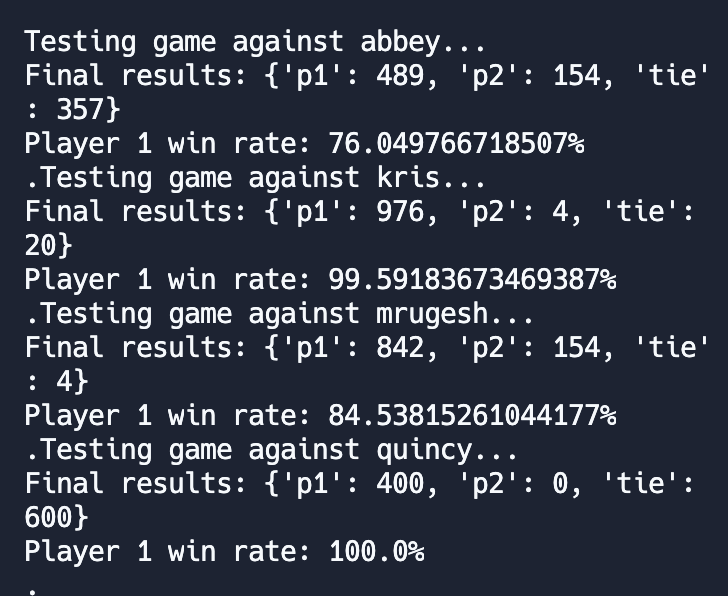 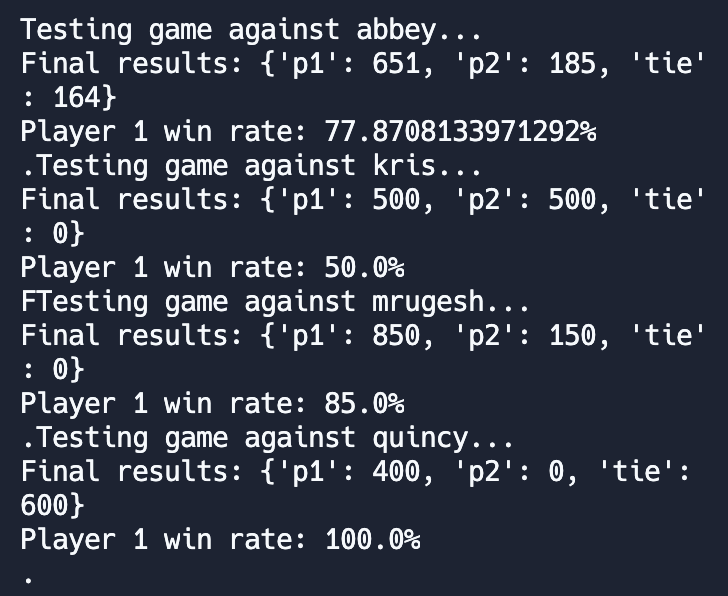 I didn’t notice this until after I submitted, unfortunately, so I’d like to clear it up quickly in case I get audited. I am wondering what could be causing this type of performance.

Here is my code:

The latest part I added was the Q table (I know it’s not really a Q learning table, but I am calling it that for lack of a better name). Before this part, it consistently passed the everyone except abbey (consistent failure).

I thought I added the Q table strategy in such a way that it would only affect the games against abbey, since the other methods are used if they work (>60% of the time). But, now it is sometimes failing kris, and also sometimes failing abbey. Also, the win rates are varying by >15% for abbey, and > 50% for kris. The other two players are still consistently passing.

Kris and Abbey are reactive players whose responses depend on your plays, so if you start with certain plays and your player is reactive then you can get trapped on certain pathways that lead to either a win or a loss in certain conditions. In other words, this kind of variability is expected unless you’re careful in your implementation.

It looks like you’re trying to use a Markov chain algorithm (your Q stuff) to start and then a frequency table (your 60% test stuff). My guess is that the frequency analysis is getting stuck in losing pathways with Kris and you’re seeing normal variability with Abbey.

Examine their code if you haven’t already for more insight. I would look for one winning method against each player (even if it’s different for different players) before attempting to combine multiple methods into one.

One of the 60% patterns is meant to beat kris, and it did consistently before I added the Q-table. I also added the random plays for the first 20 plays at the same time, so I thought maybe this was causing additional variability - sometimes, getting stuck in losing patterns, as you mentioned. I eliminated the random plays, and that seems to have fixed the issue. Thanks!