Is app development not really a good idea?

Hi there,
I’m a 14 year old Android developer and I had launched my app: https://play.google.com/store/apps/details?id=inc.developcloud.lookaway
I made it with hope that I’d be able to get quite a lot of downloads but it wasn’t really the case. I made it for the well-being of programmers. But I wasn’t successful. My parents say that app development is not really a great thing - who agrees?

My parents say that app development is not really a great thing - who agrees?

Although Native Apps are starting to be replaced by Hybrid Apps, there are still thousands and thousands of companies out there that are hiring people for Native App Development. As a software engineer, you can make lots of money so I would have to disagree with your parents.

congrats on getting an app in the store - im not sure that it wasn’t successful - you got an app on the store and at least some people use it. That’s an accomplishment - perhaps the next one will catch fire. I really have no idea how tough it would be to make apps and make a living putting them in the store like that - I think there’s more to it than just putting it out there, it’s probly more like running a business and might be tough. But i suppose doable if you keep at it. An alternative option might be to try and find a company that makes apps and work for them. If you keep putting apps out there - by the time you need to get a job you’ll have a lot to show off. This is my opinion - perhaps someone with a little more experience in this area will chime in.

I don’t know if the “I’ll make a great app and make a living off of that” is a great plan. There are A LOT of people coming up with A LOT of ideas. We can’t all get rich. If you want to do something like that you’ll need to think up some great idea that no one else has thought of (or at least do something significantly better that anyone else has done) and it’s probably going to need more than a simple app, but need full stack integration. Usually the app is just a mobile entry point into a much larger stack of technologies. Study the cases of people like Zuckerberg, Systrom, Krieger, Hoffman, et. al - they all had a great idea and built a complex system to support it. Usually the thing is going to be too big for one person to do. Any great idea that is simple enough for one person to do has probably already been done. If it hasn’t, then that probably means that it has too narrow of a focus to be a major player. I can’t think of any stand alone mobile app made by one person from which they made a living. I’m sure someone can find an example, but not many.

That doesn’t mean you shouldn’t try. Maybe you’ll be the one. And in the mean time you’re learning incredible skills. And as mentioned, there are great careers for mobile app developers. You just will more likely be part of a team instead of going it alone. On glassdoor, experienced Android developers are making $100k+. But that probably assumes some education or some monster skills. You’re probably going to want to learn some more skills (like web dev) to go with that - the era of the programmer who only does one tiny thing is long gone. You’ll be expected to understand how it’s working with the server and how it all translates to the front end web too, even if just the basics.

First of all, congrats on your achievement. At 14, I’m impressed. As to your other questions, this may be helpful for you. Lots of nuggets/wisdom here. 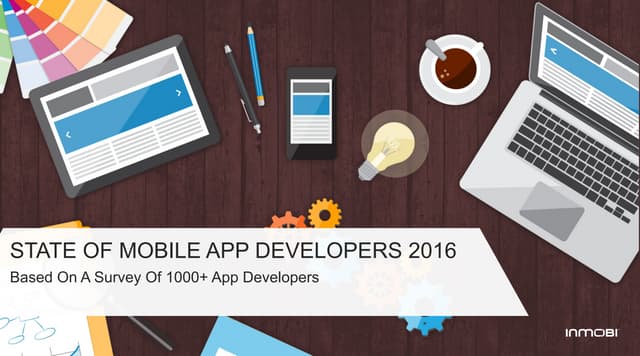 InMobi undertook a survey of mobile developers across the world in an attempt to understand the ever-changing ecosystem better. The State of Mobile App Develop…

14 yo and already have and app in the store?!! Congrats man, you’re totally awesome!

Main problem with native apps is that most people don’t really use them. Sure everybody has the Facebook app, maybe twitter or instagram, but most won’t go beyond their two favorite apps on a daily basis.

The median number of apps installed each month is ridiculously close to zero.
I know I have not installed an app since the first day after I got my phone.
And even then, most apps installed are usually used once, maybe twice, and then never again.

So it’s a hard road, and the tendency is definitely going for the hibrid way, perhaps through PWAs.

But don’t be discouraged. Having an app at the store ia a merit in its own. If you settle in that path I’m sure you’ll find a place at one of those companies that really need native apps eventually.

Personally I’d place my chips at the PWA trend. But maybe that’s just me…

These days mobile apps are a part of the whole, except for games. Think business, community, marketplace, geolocation. Look at 5miles, Nextdoor, Postmates.

If you’re interested in a future in development, then downloads doesn’t matter. As long as you have some apps out there for potential employers to see, you are good. If you were hoping to make money money from your apps, then as you just discovered simply being able to make an app isn’t nearly enough. if it was, we’d all be rich. “if you make it, they will come” simply does not apply. Exceptions to this are just that - exceptional.

Does mobile app development have a future? of course it does. Every single company I have worked for or with has mobile app development. it isn’t always in the public eye - insurance companies write apps for their adjusters, etc. Your phone is a computer - computers will always have applications written for them until the day MIGHT come when everything, across all devices, is web delivered.

If you are writing mobile apps now, at 14, I suspect that you are the sort of person who be will on top of any future shifts in the market. So don’t be discouraged. Keep plugging away - the skills and experience will open many doors for you.

Mobile App development is future Because Many people is using everything in our mobile.

Yesss I agreee with you man

At the age of 14 you designed a App, for me I think you will go far and more opportunities await you in future, definitely I believe this won’t be your stop point but a stepping stone to do more. Please I encourage you to keep up with what you know how to do best and improve more on it. I’m a newbie here and I have few projects I want to deploy soon though I need someone who will volunteer to teach me how to develop a Mobile App because it’s more of what I need in the course of my project. I will be very please and grateful if you can help me achieve, develop, design and lunch a mobile app. I look forward to receive your reply soonest. Thanks in anticipation.