You need to restart the step because you changed a lot of stuff that you shouldn’t have. It is best to only do exactly what the instructions ask you to do. Changing anything else will usually cause the tests to fail.

The instructions are asking you to do one thing:

" Find the h1 element and change its text to: CatPhotoApp"

Thanks for the response

Does it mean wherever h1 appears it should be replaced with the text? Or

Does it mean for example if i see 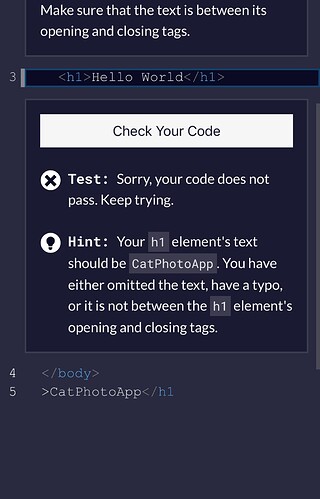 Not quite. It says you should change the text in the h1 element to CatPhotoApp.

Again, the text for an element is the text in between the element’s opening and closing tags. In this case, that would be the <h1> tag and the </h1> tag. You are changing the text between those two tags.