FreeCodeCamp show me how to use node.js.

FreeCodeCamp shows me how to use react and redux.

But FreeCodeCamp doesn’t show me how to use them both together. After two days of googleing to find out how to programm real world apps with node and react I’m lost…

Did someone know if FreeCodeCamp will teach how to programm Universal/Isomorphic Javascript Apps?

Every tutorial is so differently to each other that I’m to confused to try it by my self.

Is there a “offical” tutorial out there?

The very concept of Universal JavaScript itself is quite new, and as a result there are very limited resources on it. That being said, I do know Egghead is currently working on a course on creating Universal React apps, so keep your eyes pealed.

However, just because you’re using React/Redux with Node doesn’t necessarily imply that you are creating a Universal JavaScript application. Again this is a very new concept and is bound to change, but for the most part Universal JavaScript applications are designed to share common functionality and dependencies. The best example of this is with universal React applications; they are considered universal because React is both used client side in the form of components, and is also used server side for things like server-side rendering. Application stacks like using React client side running on an express/MongoDB Node server, while all running in JavaScript, don’t really share any dependencies or codebase, the two work independently of each other and just happen to both be written in the same language.

If you’re looking to see how to integrate React into a Node server environment, I would start with Awesome-React, a curated list of all well established React resources.

Lastly, if you are looking to see real Universal JavaScript in action, look to frameworks like Meteor, they have versions built for both Angular and React, and enforce shared code between client and server.

@vetoCode, btw, if you’re still interested in this, (at this time) there is a (paid) video course about it by Maxime Najim:

Leverage the power of React, Redux and Node to build complete web applications in pure JavaScript


and a book by the same author (he is a co-author): 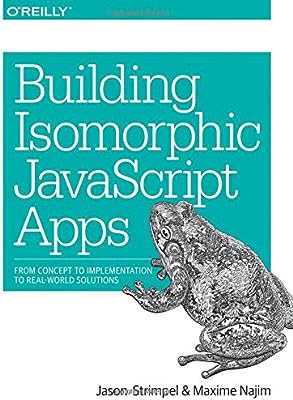 Often referred to as the holy grail of web application development, isomorphic JavaScript lets you run the same code on both the browser client and web application server. This hands-on guide shows yo ...