Looking for some feedback on my Portfolio site

Hey all, i just finished my basic portfolio website, still have to add more content/projects but the design is pretty much done. Is it good enough to use when applying for jobs etc? Any feedback is much appreciated, thanks!

Thoughts:
The sound on toggle is jarring.

At full widths, the site has a nice effect, but by the time it reaches the smaller widths, the information becomes too closely spaced. 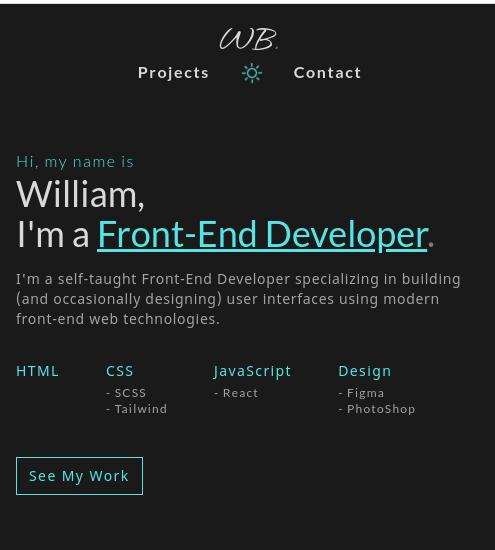 It loses the Emphasis that the Negative space of the Full widths gave it.

Maybe consider re-spacing and resizing the text at smaller widths, to give emphasis to the:

"Hi, my name is William,
I’m a Front-End Developer.

Centering your name, and the large texts, at the smaller widths, could be beneficial.

Thanks a bunch for your feedback!

At full widths, the site has a nice effect, but by the time it reaches the smaller widths, the information becomes too closely spaced.

Yep i can see that now , i will clean it up abit

Centering your name, and the large texts, at the smaller widths, could be beneficial.

Yea i was thinking of doing that at first but decided not to, dont know why. Guess i should atleast try and see how it looks like

I don’t know if it will be better, but I’ve seen it done before to good Effect, ans so I figured I would suggest it. Typically, I would modify the CSS and see how it looks first before suggesting it. But, in this case I don’t have a way to easily modify your code.

Either way, The site Doesn’t really need to be Improved. It is a strong enough design.

yaa i have seen it too quite a bit

it is changed now, i think it looks abit better. also adjusted the font sizes and breakpoints a bit