It’s been a while since I first joined freeCodeCamp. My Twitter, GitHub, and LinkedIn profile links have all changed and I’d like to use a different profile picture. How do I update this information?

Unlink FCC from the applications that you’ve changed (GitHub, etc). Then you should be able to connect from your profile page. I’m not sure if this works for social media, but it does work for GitHub. The profile picture will pull from your connected GitHub account.

@ArielLeslie I’m sorry I didn’t read your reply sooner. Apparently “You will receive notifications” doesn’t mean I’ll get an email.

There doesn’t seem to be any way to unlink FCC from twitter or linkedin. There’s nothing like that on the FCC page and freeCodeCamp isn’t listed in either Twitter’s Applications or LinkedIn’s Permitted Services.

My GitHub profile link is fine.

The LinkedIn link is not the one provided for my profile but, somehow, it still ends up at the right place.

@ArielLeslie FCC isn’t linked to social media accounts via OAuth as you suggest. It just shows URLs on the profile page. I think I must’ve used those when I signed in in the past.

You have a misunderstanding about how OAuth works…

When one site, an OAuth client, uses a third party OAuth provider such as Facebook, Google, Twitter, or GitHub for account information, it’s true that it usually only gets that account information when it’s first linked. Refreshing that information can require un-linking and re-linking, but that happens at the client site, not at the social media site / OAuth provider. As an example, check Medium. They link to Facebook and Twitter using OAuth. If you change your Twitter username, you’ll probably have to “disconnect” your Twitter account on Medium’s account page, then link it again.

If you revoke client (a.k.a. app) access at the social media site it might cause the client to remove the information from their database, but it might not because that’s all controlled at the client site.

For the record, I never deleted or changed my social media accounts. I just changed my usernames. On LinkedIn I edited my public URL on the profile page and on Twitter I changed the username.

FCC isn’t the only place I’ve used these accounts. When I changed my usernames / URLs I had to unlink and re-link the accounts at each site that used them. That doesn’t happen at the social media site, but at the site which uses it for authentication. This is how FCC works with GitHub because that’s the only OAuth provider that FCC actually is linked with.

Here’s an unfortunate discovery… I thought I found a solution, but it turned out to be a much more serious problem. I clicked “Sign me out of freeCodeCamp” on the profile page. When I tried to sign back in using Twitter via “Click here if you previously signed in using a different method.”, it updated my Twitter link… Great! But when I tried the same method with LinkedIn, I got access to someone else’s account.

Ya… I think I will email team@freecodecamp.org now…

Today I got a “reply” from team@freecodecamp.org. They’re awfully proud of some changes they’ve made, and they claim to have fixed the specific issue I mentioned. 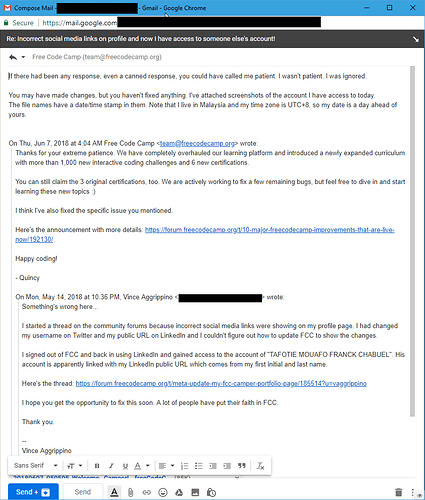