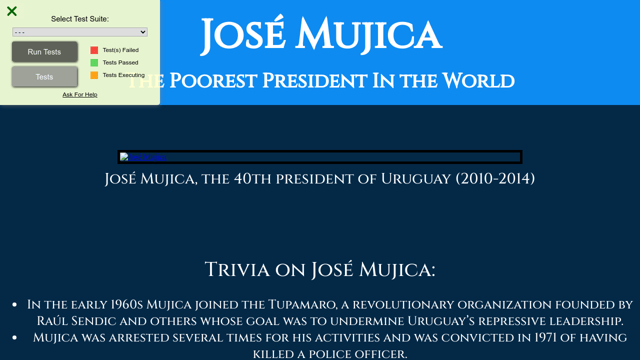 Hopefully the link works, I can only post one image unfortunately

I can’t figure out why it’s not correct, I could’ve sworn that #3 had been correct before but then I moved some things around when trying to pass #2 so that may have affected it? Not 100% sure though. I used Inspect Element on the example Tribute Page to see if I could gleam something off of that but it hasn’t helped me.

This is my second attempt at the Tribute Page, criticisms would be more than welcome.

It’s more likely you have syntax issues before it.

like directly on line 2
why have you added inline styling to the html tag? anyway, you are missing a " there

and if you look around you find similar issues just before the failed test, line 101 for example

Wow, thank you so much, seriously, I had thought about just starting it again from scratch and that was kind of demotivating. I added the " to the examples you mentioned and to another I spotted once I started looking then I ran the test and it went from 6 correct to 9.

This is why I added it, does it cause issues if I have it there? Or it just an odd thing to do and there’s better ways of getting the same effect?

You can use css and style the body.
Your CSS should also be in a separate file. Keeping your css separate from your html is better design.

I see, thanks for the reply and advice. I was worried about having the code being messy like it was in my first attempt and admittedly I completely ignored typing anything in the CSS area since the start, going forward i’ll do my best to separate them.