I read that there are 42,000 CS grads and 2000 coding camp grads per year. And that does not include FCC grads.

Also I cannot find numbers on how many total jobs there are in computer science, web development etc.

I keep reading there are 400,000 open jobs. But what does that really mean? Does that mean how many job ads are out there How many new jobs will there be and what is the total amount of jobs? And I read that about 60% are in networking.

Does anyone know the placement rate for FCC or the total number of networking vs. web development jobs? I am trying to make a wise decision for time and money for myself and my daughter

Here is a link to some of the available FCC data - its not extensive but it will give you some idea about the numbers.

I have a networking background ( I have a CCNA and a CCNP from Cisco Systems ) and I switched to developer because there are many many more jobs. The field of Networking is much more narrow in scope, and thus so is the opportunities. Learn programming and there is much more opportunity to move around into different fields because when you learn one type of programming skills you can directly apply it to other fields in programming. So just pick something you find interesting ( front end, back end, application development, etc. ) and go from there. You’ll get a better focus in what it is you like and are good at as you go, so don’t worry too much about your first months because whatever you pick to learn it will be useful and much of it will apply to whatever it is you end up doing.

this is what is confusing according to the labor stats there are 2xs as many networking jobs and the growth rate is 2xs. it is hard to figure out what is accurate

these are interesting numbers on cs and bootcamp grads - is that in the us or the whole world? where did you get them?

where is the 400,000 open jobs number from? I’d like to know how that number was calculated and what specific areas of computer jobs were included

seems you have done some great research on jobs and careers to make an important decision for yourself and your daughter - is your daughter finishing high school and thinking of a college major?

it would be fantastic if you can share what other fields you are choosing between - is it other engineering or science fields? what did your research find about graduation and job counts in these other fields - how does cs compare?

I got the stats by googling. But again their meanings are not clear. I read also that Obama said there will be almost a million jobs in IT not able to be filled by 2018. But that means almost a doubling of those jobs. Yes she is graduating from HS soon.

Of course the medical area is a possibility and accounting. She seems to think there will be too much competition in web dev.

That’s why I am trying to get the stats on these jobs but I cannot find them. The coding schools near us claim 100% placement rates. That bothers me right off the bat. And they are such aggressive sales people. She thinks the market will be flooded if she goes the webdev route. I also read that there are only 150,000 webdev jobs in the whole country. FCC camp graduates about 1500 per year from what I read. At a 5% growth rate that means only 7,500 new jobs nationwide. It just seems that there will be way more code camp and college grads than there will be new jobs but it is hard to find stats on this that is why I am hoping someone else can help me find these stats so my daughter will make a good decision. But be better for her to just be an administrative assistant which she can do now and it pays almost as much as an entry webdev job.

I just noticed you said she could become an admin assistant right out of high school - is that right? wow! that sounds like a great gig for a young person - get paid for a white-collar job at 18 - what’s the entry-level salary and how many open jobs are there?

what’s the career prospects for admin assistants without college? could promotions to senior admin assistant require a college degree? or is increasing proficiency in ms word enough for her to climb the corporate ladder?

Check out cyber security as well.

A quick search comes up with figures like “a million vacancies worldwide today and 1.5 million by 2019” and “zero percent unemployment rate”.

Sorry if this adds to the confusion

She is still open to a lot of things. But you do not need any college to be an admin assist and it uses microsoft office mostly. it almost pays as much as webdev. She has older cousins who went to college and have huge student loans and she does not want to do that. And my nephew used to build websites part time but stopped because people can build their own with wix and weebly and they did not need him anymore.

But I still would like to see the numbers. I do bookkeeping and numbers to me tell the true story if you can get truthful and accurate ones.

that 1 million $ more for college grads is not a true stat. I have known people climb the ladder without college degrees and who started as admin assists. I read that 2/3 of college grads end up in jobs that do not require a degree.

college is not the advantage it used to be.

what is not true of the $1 million stat? reuters said so about 2 years ago - if anything the number has probably gone up since then 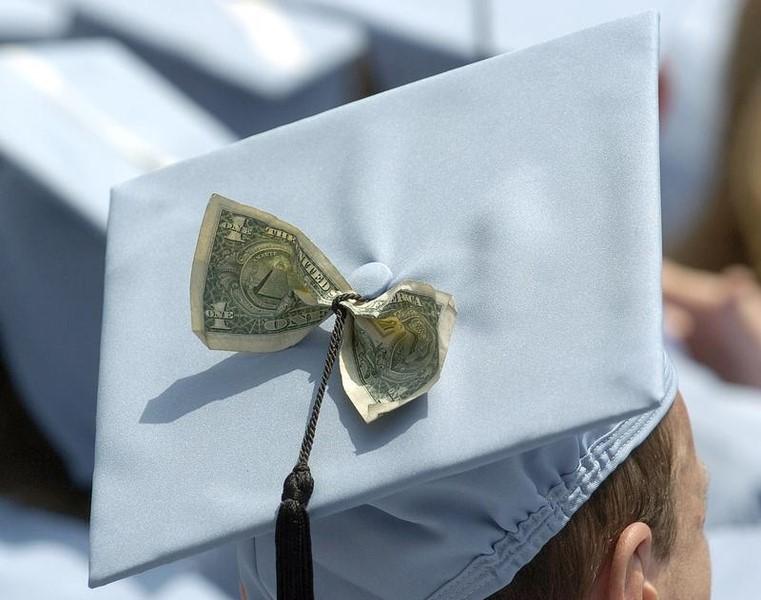 What is the economic value of a college major?

With university tuition and student debt at record highs, many people wonder if it is worth it to go to college.

I really do not want to give out names of people I know who started off as admin assists and worked their way up the company ladder. You have never seen this?

Did you read how they came up with that million dollar number? I think lately a college degree is becoming less and less important. I have read stories on FCC where people had degrees and got nowhere till they did FCC and people who got web dev jobs simply by doing FCC. You can do harvard classes on line for 0$. Why pay big money to go to college.

zuckerberg, gates and jobs are probably not typical mailroom-to-corner office stories though - they were all hugely nerdy as little kids and far far ahead of the computing trends of their times - gates and zuckerberg also did get into harvard in the first place - and jobs well what can you say about jobs - he was like one in couple generations type of guy

I am convinced from my research that a college degree now has no where near the value it did 30 years ago. And I have seen people start off as admin assists and do pretty well without a degree.

What I am trying to find is numbers about how many web dev jobs there are and how many grads are being produced to help my daughter decide whether she wants to delve into coding besides admin assist.

Do you know where I can get those numbers. I have googled and cannot find them. ty!

There will always be a demand for admin assists. There has been for millennia.

I think siri, alexa and jarvis beg to differ

are you promising to not post for another 10 years?

Bye! Have a wonderful day!

I think there will be a glut soon, bringing down average salaries. Not that I see that as a bad thing. We should be honest and confront our sense of entitlement compared to people in other industries. I know the non IT world was a shock when I left Microsoft 5 years ago. Did you know Boeing doesn’t even give its employees free soda? Then I started working at a preschool and was so grateful just to have coffee (and that place was leagues better than the training centers I am employed at in other countries, in terms of sanitation and food for the kids. Plus the director was awesome, payed for all that stuff out of her own pocket).

Coding camps are shutting down everywhere recently. I don’t get the feeling many employers want to employ most camp graduates who dont have related experience or another degree. Just a strong stereotype of camps not preparing students well. Not to say people can’t and don’t get great jobs or find fulfilling careers but I fear too many people think a camp is going to give them some sort of security when in reality we are only building a skill set. One should be industrious and enterprising, it is our character which ensures we are employable. I love FCC because many of the people here are exactly that sort. People who work hard to find opportunities and don’t just pay 20k for a piece of paper that they expect is going to allow them to compete with someone who spent 4 years at Stanford.

Sorry for the rant, I know it is off topic

I have been thinking about this alot lately because I was a college dropout who got tremendously lucky as a contractor in Seattle but I am not sure I could even get back in and am now concerned with the ageism as I soon hit 30 years old with no recent experience and no possibility of completing a degree before my mid 30s. Now I am trying to pursue a degree while figuring out ways to use technical expertise with my more recent experience in the education sector. And anyone could do this, automating tasks for their employer or building the tools their profession lacks. It is really exciting! I just have to be persistent :-/ haha