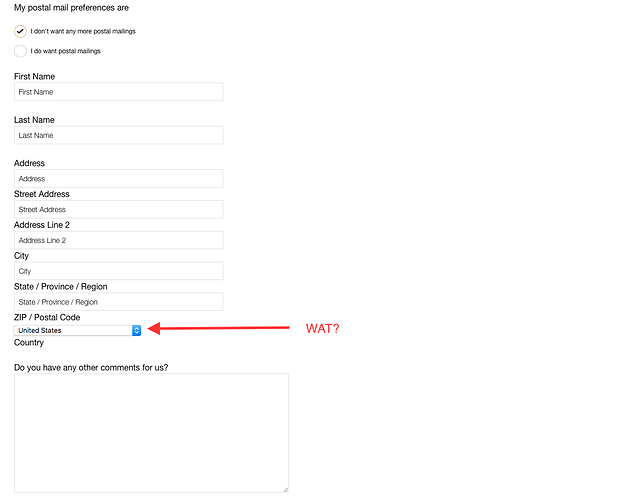 Rather than just write a big thing about how terrible this form is, I thought I’d leave it as a public discussion.

It looks to me like someone just made a cut and paste mistake.

It’s a shame because it is such an obvious mistake. It’s easy to sympathize with some coder that has an intermittent bug that only shows up during rare conditions, but this is pretty basic. It’s just a lack of proofreading.

I’ll give it a shot.

Inconsistent format. It starts off with good spacing for First Name and Last Name then on the Address section, that spacing is gone.

Address and Street Address? Ambiguous. Should the first field be labeled “Business Name” or something?

State / Province / Region - if this is for US based audience, State field is enough. Preferably a pull-down menu selection.

Country label appears below the field (all the others, the labels appear on top of the fields), and why the need for a selection box for Country (again, assuming this is just for US based customers)

Oh yeah, didn’t see the address thing. That is bizarre. Yeah, I could see the first address line as a business name, if it were optional.

I kind of get the spacing - I think the idea was that the address section is all part of one thing, the address. But it probably would look better with spacing.

I kind of get the spacing - I think the idea was that the address section is all part of one thing, the address.

Yup. I had to look at the markup to figure that out. I should note that what you see in the input fields aren’t placeholders, I typed that in myself. They labeled the whole section “address” without communicating that in a visual hierarchy. Even worse, it fit the emerging visual pattern established by the name fields having their labels on top.

If this was a problem for me, then I can’t imagine how frustrating this would be for someone with cognitive impairment, or a person who’s just having a stressful day.

Maybe the ZIP/Postal Code thing is meant to appear after you’ve chosen a country so the form can give you a field with the correct validation for that countries code format. So it’s not 100% WTF but it is definitely unintuitive. (Isn’t there some famous design book called “Don’t make me think”?)

I can’t think of any rhyme or reason for the three address fields.