edit: I found the issue. FYI, issue came from not displaying the zero in front of the single digit for minutes. So the null value probably came from the script looking for a fourth digit that didn’t exist.

I’m running into these errors with the testing script for User Stories #22,23, & 25. The script displays a TypeError: Cannot read ‘1’ of NULL so I assume it’s pulling in a NULL value from somewhere but I don’t think my “time-left” box is ever NULL. Can someone help me troubleshoot this issue? Thanks

FYI. There’s still some bugs with updating the session/break times while paused but don’t think that would affect this issue. Also, audio hasn’t been added yet. Screenshot of error below. Can’t link project because I don’t have enough forum posts and new users can only post one image so url is also in screenshot. Sorry for the inconvenience. 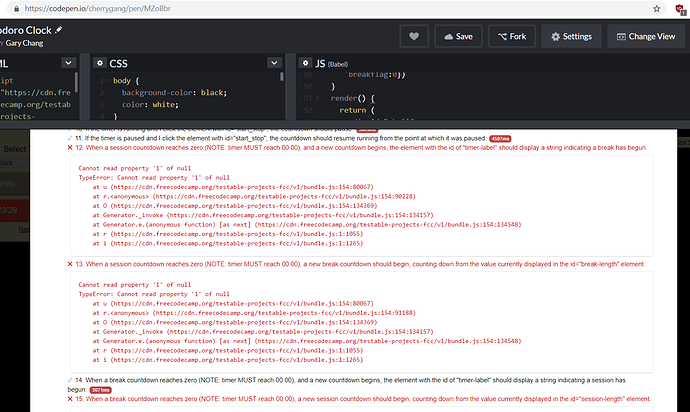