I’ve been trying for a long time to figure out how to get my json back in the same order that I send it out. I think I’m having a hard time understanding how callbacks and promises work. I’d be grateful if anyone could help me understand what I have to do.

I’ve read a lot of documentation and watched videos, I just seem to be missing some things. It’s been a while, and sometimes it feels like I understand less every time I look at it now. It’s getting just a little bit frustrating… 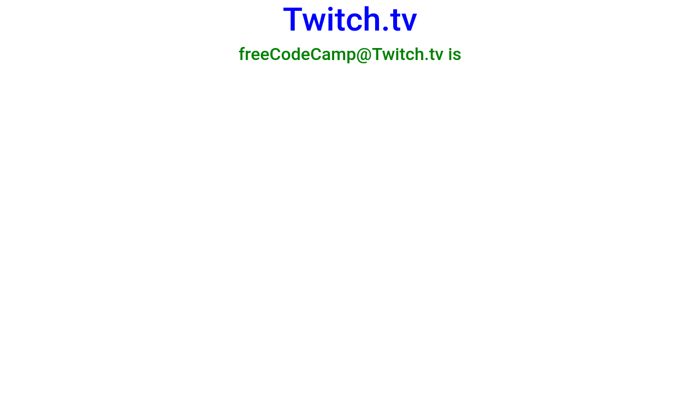 I know I can finish the challenge differently, but I’d like to figure this out.

I’m currently working through this project as well and had similiad problems. I managed to get it working, but since I can’t wrap my head around promises and callbacks it’s definitely not the best/most optimal/industry standard solution.

function to build my html using streamData array that now contains all the data I need. ajaxStop runs after all ajax request are finished. If you run more Ajax somewhere on the site this solution will be wonky. The order of streams on the list does not matter to me so this might need more work if you want the list to always be ordered the same way (I guess you could just sort the array in ajaxStop()).

I may have missed some brackets in the code, markdown is not my strong suite.

I’ll give it a go since I’ll likely have to explain it to my sister at some point!

To begin with a probably simplistic (but conceptually easier to deal with) view of a callback is that it is simply a function, say, fnC, that is passed into another function, say, fnA, as an argument. The purpose of doing so is often because fnA produces results that have some other use. Consider the following example:

Assuming that you have understood the code above, and in the context of the example given, the function count is supplied as a callback to the function furJede in the following line:

That’s really all there is to it—it’s a function, or callback, that’s supplied to another function that gets called in the latter at some point. Let’s suppose we want to add the function furJede to an array as a method, we will rewrite the furJede function as follows:

Alternatively, and without declaring the callback function (count in our case) beforehand, the function call arr.furJede(count) can be written with an anonymous function as:

At this point you are probably thinking that the function furJede looks seriously like Array.prototype.forEach method:

And you would be right because furJede was designed to do something very similar to forEach. If you are familiar with forEach, the function that you give to it as an argument is a callback; in fact, you have probably been using callbacks without thinking that they are callbacks:

That’s really (I think!) all there is to callback—it’s really is just a function you give to another function as an argument, which (the callback) gets called at some point inside the function you supply to.

If it’s clear what callbacks are at this point (hopefully so!), and if I’m not mistaken, callbacks may or may not be involved with Promise(s) (more often than not they are)—so let’s forget about callbacks for now! It looks like you do have working code, but I assume that it’s a general question and you don’t seem to be the only one having troubles with it, so moving along, consider the following code:

The expected output in the log would be in this specific order:

The reason is because fetch is asynchronous, so any code that comes after it would be executed immediately after it starts. Since it takes some time to get data from a remote location, the line console.log(quote) will run before console.log('Fetched: ', quote);, therefore you get undefined.

This is where Promises come in; as you already know, a Promise lets you do something, wait for your code to signal that some operations (most likely async!) has finished (Promise.resolve, for example), and gives you the option to do things afterwards (Promise.then, for example).

The promise constructor, as you have already seen in the MDN documentation and used in your code, takes the following (simplified) form:

The basic idea is that you do something inside the function inside the constructor and use the resolve method to indicate that things are done when, well, it’s done. Using our example from above, if we want the line console.log(quote) to also return an object, we can rewrite it using a Promise as follows:

The expected output will now ibe n this specific order:

There are two key points to note here:

The following code should now be a lot more straightforward to understand, not least because you have done it in your code (see comments):

The output of the code above is still:

To avoid confusing you, something that I deliberately avoided pointing out earlier is that fetch is actually returns a resolved promise—that’s why the then method is available to it. So the code is actually a bit of a silly example since you can just do everything inside the second then after fetch in this particularly example; I wanted to avoid using setTimeout because you may have also been confused by the example in the documentation (I personally had lot of trouble just because of the syntax).

By the same token, and with respect to your code, it is worth noting that jQuery.getJSON actually returns a Promise-like object that is thenable, so the Promise constructors in your code is actually a bit redundant:

Now that you (hopefully) have a good grasp of how promises work, the last thing that I think you may find useful is Promise.all().

Currently in your code, you are iterating through a list of usernames and making API calls for each of them; since the responses from the API arrive at different times every time, the order of the users is actually (very likely to be) different every time you refresh your app. Promise.all lets you deal with an array of promises and only do something after all of them have been resolved. In conjunction with Array.prototype.map, you can keep things the same order (if you wish to) like this:

While Promises is not the only way to deal with async actions (have a look at async function if you are interested), it’s probably not (at least currently not) a good idea to gloss over it and/or find structures that approximate/work around it.

I hope that helps and hopefully there isn’t anything wrong! I’m also happy to expand on it if anything is missing. Good luck!

Thanks, I appreciate the answer, I’ve been going through it and it’s helping me understand things a bit better.
To be clear, my code does not work. I’m trying to get the information back in order, and i can’t, I don’t really know what to do. I’ve read a lot of documentation on a lot of different stuff. I just cant figure out how to apply it to my code. My promises don’t need to return anything after i use them, so my functions for displaying info are separate from each other, but i want them to run in order.

Thanks, I 've never heard of ajaxStop before.