Hey Guys;
I am about to dive into the final projects from the QA section - but noticed the first two ‘tests’ seem to be asking us to install helmet - (I randomly starting working ahead into the security section when I was stuck).
But essentially, am I missing something, or are the first two questions(solved by installing helmet which wasn’t covered in the course yet) misplaced?
For anyone who hasn’t looked ahead, they would have no idea about those concepts yet, so seems odd to have them in the tests.

This is a known issue, and the current plan is to remove those tests:

Describe your problem and how to reproduce it: With the roll-out of the Python curriculum, the full stack curriculum was restructured and...

This was caused by the reshuffling of the curriculum, when the Python content was introduced.

Either, go ahead and learn the Information Security with Helmetjs section of the course, before tackling these projects. Or, complete the projects without the helmet related content, and the tests will be updated eventually.

Hey Sky;
I found an error in the tests for this first exercise and was wondering if you know how to get it fixed…
Its the first test, the test is looking for 5 decimal places everywhere except where circled below -it’s trying to match 4 decimal places… 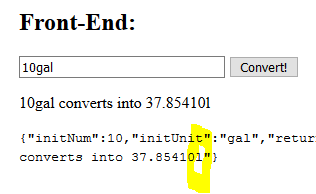 There should be no issue with this, because the value rounded to the 5 decimal places just so happens to produce a 4 significant (after the decimal) figure number.

Here is my project for reference: https://metric-to-imperial-converter.glitch.me/api/convert?input=10GAL

The method I used is:

Edit: In the picture you have linked, the return value is rounded to 6 decimal places.

Strange, I use the same…I’ll have a look thanks

Found something in my code.
Thanks again Sky!!!

It’s strange cuz the lowercase L looks like an extra 1 in that snip right?!

It’s strange cuz the lowercase L looks like an extra 1 in that snip right?!

Right. Sorry, my blindness got the better of me in that.

Perfect I thought that was the case.
thanks!