I’m having trouble getting my JS file to run properly. I’ve tried watching a few tutorials without any luck. Any recommendations would be great. Thank you! 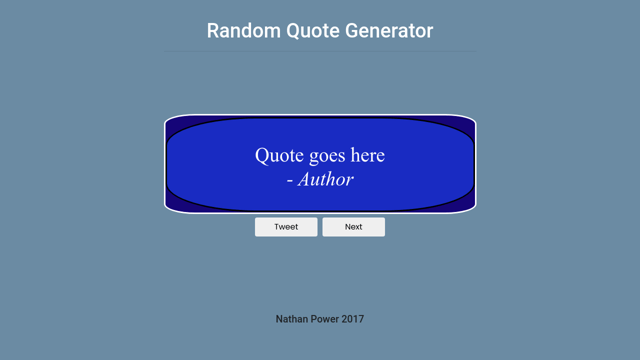 You need to resolve the issue shown in the JS code section. Click on the red exclamation point for more information about the error. You are missing a } at the end of your randQuote function.

Once that is fixed, you will see an error in the browser’s console (Ctrl+Shft+J in Chrome) regarding the use of a variable called quotes which you have not defined anywhere.

Hi, Randell thanks for the reply. I’ve tried what you recommended and am still having difficulties.

If you look at the browser’s console (Ctrl+Shft+J in Chrome), you will see you are trying to reference randomeQuote, but randomQuote only has a value inside the randQuote function. It appears you place your closing } in the wrong place.

Hey, so there are a few things wrong here.

See where you have quotes.length? quotes is not defined anywhere. Your quotes array is called text

So, those 2 variables were defined specifically within the scope of randQuote(), which means only randQuote() has access to it. You then tried to access those variables from the global environment, and they cannot be found. To fix this, initialize the variables before you call the function on lines 1 and 2 like this:

Since those variables are defined globally any function can access and change them. This will give you access to the variables outside of randQuote().

I forked your project so you can see that mine is working,
https://codepen.io/tsjohns9/pen/JMrpxY

Here is my random quote generator

Instead of just posting a link your solution, can you offer any insight to the OP’s problem/question?

Perfect, thank you so much! I really appreciate it, I’ll make sure to review scope.

Thank you so much, really appreciate it!

Got it working perfectly after, just have to add quotes and play around with the styling. Thank you very much, Randell.

I did offer insight into his original question by explaining where the issues where. The main issue was that there were variables being called out of scope.