In this example, what does mean renderSquare ? What does it makes ?

It creates a single Square component. In this case, it is an empty button element with class name ‘square’.
This demo isn’t really good and I would avoid it.

Maybe if you pls will show good example ?

I don’t have example that directly addresses what you want; but I can point out problems in demo.

I have a working version of Tic-Tac-Toe written in React but it does more than just rendering the board. Thus, it won’t serve as a good example in demonstrating how to render a grid board.

renderSquare in the example of react is a function written to include the Square component. Since it needs to create the same square 9 times.

When I see a class like className="square" i will think the css code associated with it will make the element’s both width and height same value as:

renderSquare means a function and this function return the square component. 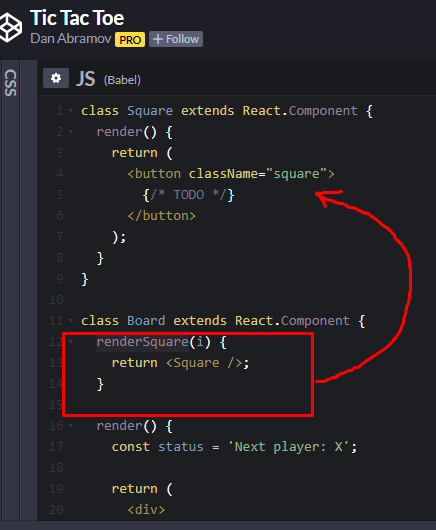