That’s one small step for man, one giant leap for mankind.`

Neil Armstrong said, making his first step on the Moon.

A journey of a thousand miles begins with a single step.

Believed that Lao-Tzi said that.

Now, what it has to do with coding, specially in the beginning?
Since yesterday night I was dealing with something that didn’t worked, in HTML. Something was not right, and me trying and trying and I could not make it work the way like I needed. I finished all the HTML\CSS part of the curriculum, than I MUST how to solve it. BUT… the solution was not coming by. It’s something simple, even very basic, since I’m only in the beginning, just like two weeks learning.
I put a goal to myself not to search on the web for answers or checking the other projects for a solution, i decided to cope with it by myself!

today, at 1500 (after start dealing it for couple of hours in 22:00 the previous day) it finally worked!
A really long time passed since I had that feeling of satisfaction! It’s wonderful!!! And it gives you more and more strength to continue to code, to fail, to search for mistakes, and being happy that it finally works!

So for all campers that began their coding journey not a long time ago, like me: DON’T BE DESPAIRED! continue to try and solve! by yourself or with help of the read, search, ask method.

and in the end, at last I understand this coding humor pic. 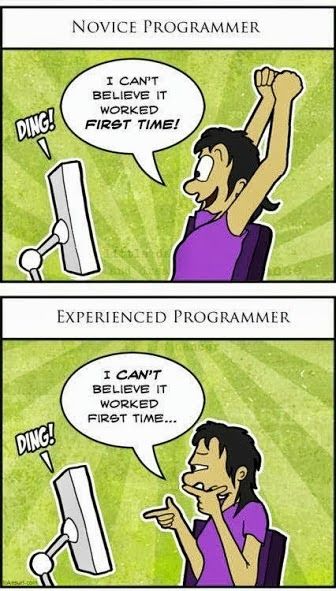 glad to read your success story!

And I’m happy you felt this great sense of accomplishment.

Its a small very basic success, linking outside css file to html