Hi,
I wonder if someone could give me feedback on my solution. It passes all the tests apart from the last one, and from other posts on this challenge I get the impression that this is about the solution not being efficient enough.

I’ve done coding before but have never been good at maths. How can I improve the solution? It doesn’t depend on an array, which I think is good because no potentially large array of numbers needs to be held in memory (depending on what you input), but perhaps the algorithm isn’t efficient enough if it’s not passing the last test.

(I also read that you can add // noprotect to get the last test passing, but this doesn’t work for me in any case).

actually it is not very efficient that is why last test case is not passing ,In last test case loop will run around 263340 times until the multiple is found according to your code.
otherwise logic is great just a little optimisation is needed.

Would it be more efficient if he finds the next common multiple rather then multiplying the high number of results for each loop?

So spoilers here; I am not very knowledgeable w/r/t maths, so had to look this up, but:

The performance will never be fantastic because the number of computations just explodes as you add more numbers to the range, but I think it should be pretty good - passes the tests no problem, and there’s no visible slowdown when I run the function in my browser. In arithmetic and number theory, the least common multiple, lowest common multiple, or smallest common multiple of two integers a and b, usually denoted by lcm(a, b), is the smallest positive integer that is divisible by both a and b. Since division of integers by zero is undefined, this definition has meaning only if a and b are both different from zero. However, some authors define lcm(a,0) as 0 for all a, which is the result of taking the lcm to be the least upper bound in the lattice The l... 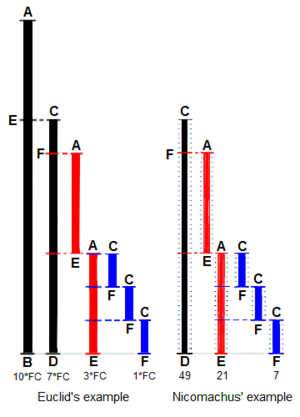 Implementations of the algorithm may be expressed in pseudocode. For example, the division-based version may be programmed as At the beginning of the kth iteration, the variable b holds the latest remainder rk−1, whereas the variable a holds its predecessor, rk−2. The step b := a mod b is equivalent to the above recursion formula rk ≡ rk−2 mod rk−1. The temporary variable t holds the value of rk−1 while the next remainder rk is being calculated. At the end of the loop iteration, the variable b h...