Hello everyone!
I’ve just finished the first big FCC project, creating a tribute page to one of my idols, the great Mia Zapata, late singer of The Gits.
It was really fun doing this project, I had to research a lot and feel like I learned a lot in the process and became more familiar with HTML and CSS.
However, I’m sure my coding lines can be better, so I’d love to receive your feedback!
Thank you! 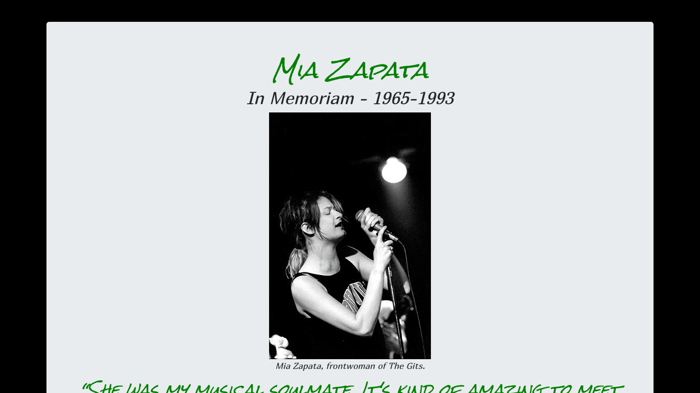 I don’t like (and i don’t think it’s a good practice) that you are using inline style (within your h1):

You already have the H1 element defined in your css file.
Why don’t you just put color:green in the css then?

Hello Manuuzzz!
Woah, you’re right!
I guess I oversaw that, if tehre’s already a h1 in css, it makes no sense to keep the inline style.
Thank you for your feedback!

Ah, @Manuuzzz, now I remember why I kept the inline style: somehow, when I wrote “color: green;” at the h1 element in CSS, it wouldn’t change the color! Any other change would work, like putting it in italic , however, I couldn’t make it green.
I wrote it in CSS once again, and this time I used the command “!important” - this time it worked.
I don’t know why this happened.

I think that is because you use tags within your figcaption.

For example:
if you set color: green in figcaption within your css, it will be green…but then your h2 will also be green.
(i’m not sure if you should use tags within a figcaption.

As a workaround, you can add another class name to your h1 element, for example :
< h1 class=“text-center colorgreen”>
In css: h1.colorgreen { color: green; }
But that is in fact quasi the same as you do with !important.

Anyway, i think it because of your figcaption - h usage.

I see. I don’t fully understand how the figcaption interferes with h1, but thank you for your input and tips!

You are right…
I copied a h1 and it starts being black from under jumbotron.
If you place a h1 directly under container, it is green.

It worked just by replacing bootstrap3 to 4.
Thanks, Manuuzzz!

@Pagey
haha, thanks! It wouldn’t make sense to just talk about her, people have to listen to her voice to see how special she is!