I am finishing up my Tribute page on Elon Musk: 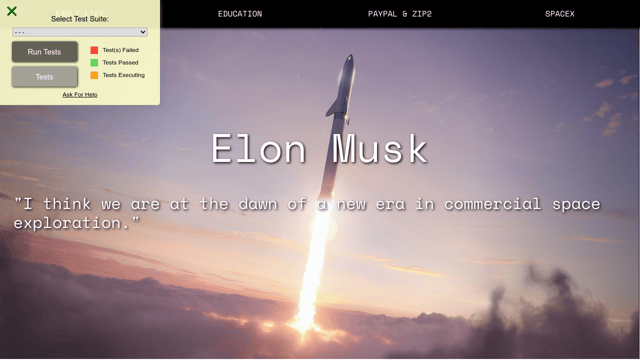 For User story #5, I have the test 3 .image-div overlay containing textual information about my first image. (HTML line 30 - 36). This contains tests 4 and 5, with only 5 not passing. The only possibility I can see is that img-caption is hidden until hovered, which may throw off the test.

I am also failing test 1:

@michaelnicol, when a test fails lick the red button to see which test(s) are failing and text to help you correct the issue.

Do you understand what the test is looking for and why it’s failing?

As for the layout test, it tells you what the missing properties on the image selector are.

Thank you both for your help. I made the mistake of skim reading and skipping over important details when looking through the errors. I also should’ve designed the webpage with the users stories in mind first instead of worrying about them later.

I will learn from this mistake and I am happy with the now 10/10 tests passed!