Why is function out of scope? Tic Tac Toe

Note: the error only occurs after first game with computer has been played (with user as either X or O), after reset_game function has been run.

You’re fantastic! Thank you very much.

glad that i can help

Hello again. You’ve been such a help to me, I thought I’d just reply to you first instead of making a post about new tic tac toe problems.
First of all, I was curious about trying strategies here instead of minimax. But I don’t know if it’s even possible to make it unbeatable this way.
Right now, my AI is pretty stupid. It seems in my computer_win function, chunks of code are being skipped over, or all of the else if statements are not being read in order. Not sure why. AI should be much smarter than this if it follows my trail of if/else if statements. Codepen

I actually tried min-max algorithm and not familiar with this approach/strategy you shared. though some of the people in fcc tried this kind of strategy so if you make a post about this you can get positive feedback I hope.

and current odd behavior can happen for 2 reason

make a new post on this topic, in the meantime, I will take a look at your code if I found anything I will let you know

Thanks. I figured it out while the internet was briefly out, actually.

I have variables named game_mode and game_model (quite dumb, it turns out). In my computer_strategy function, there were a handful of times I accidentally substituted game_mode, which just keeps track of whether the current game’s between two humans or human and computer, for game_model, the array keeping track of whether each square is assigned X or O, or empty. Fixing these typos made my AI unbeatable, as far as I can tell right now.

@icartusacrimea I was able to beat the AI several times in a row with the following strategy: 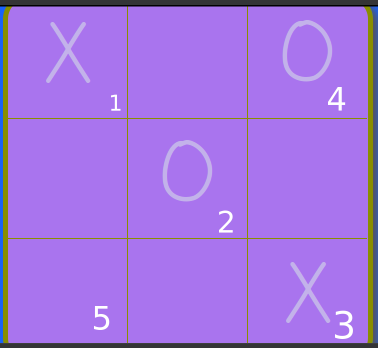 Got it. Thanks.
Try now.

I confirm that the issue has been resolved. I could not beat it anymore. Great work!

I also got one set of moves that guaranteed me like 8/10 wins.

Very interesting. Similarly, someone in a separate post said the bottom of the board doesn’t seem to be as effective as the top. I will investigate.
Thanks much for testing.