Zombie topics coming back from the dead?

Recently within the last few days or so I’ve noticed some old forum topics come back from the dead. Usually I’m looking at “Latest” which shows posts that people have recently made or commented on. The odd time someone has commented on a post from a long long time ago and the comments are absolutely irrelevant at this point. The other day I noticed one about someone needing a laptop…a year ago… and a comment with a recommendation. Surely the OP bought one already!

Tonight here is another. I took a screen shot anyway.

Just wondering if there is some bug in the forum or why/how people are accessing these old posts? 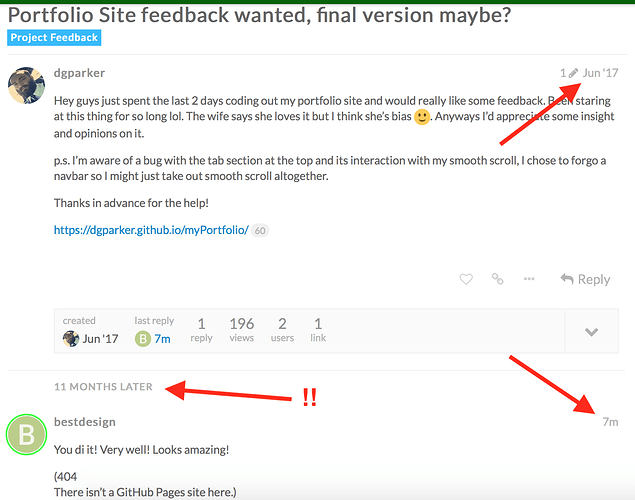 It’s not a bug. Our topics don’t automatically lock after an arbitrary amount of time. Some people just reply to very old threads. They could be searching or sorting on some criteria other than age. Who knows?

Since many of the challenges on FCC have been around for years and campers are still running into the same questions now as they were when the forum started, it makes sense for some threads to remain active long after the OP has moved on.

Thanks @ArielLeslie. Yeah it’s good to keep old threads around. I know when composing a topic the composer window will try to suggest threads to me. I think that’s a great feature and hopefully it eliminates a lot of duplicates.

Is it a good idea to give users a little notice that it’s an old thread (like over half a year or something)? Some of the replies I’ve seen on this old threads are just not fitting because significant time has passed. It seems like some commenters are just unaware of the dates (I would totally be one of those

That sounds like a good feature to suggest for Discourse (our forum platform).

@ArielLeslie I went there. I searched and found out that there is already a warning. So I tried in the FCC forum and it’s there. It looks like this: 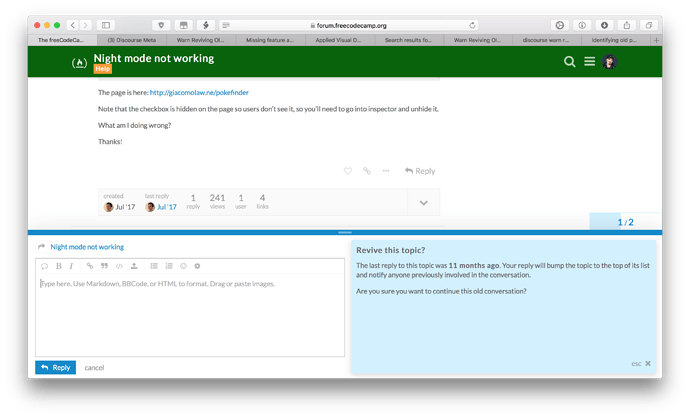 But to be honest that blue is so soft that it doesn’t seem like a warning at all! 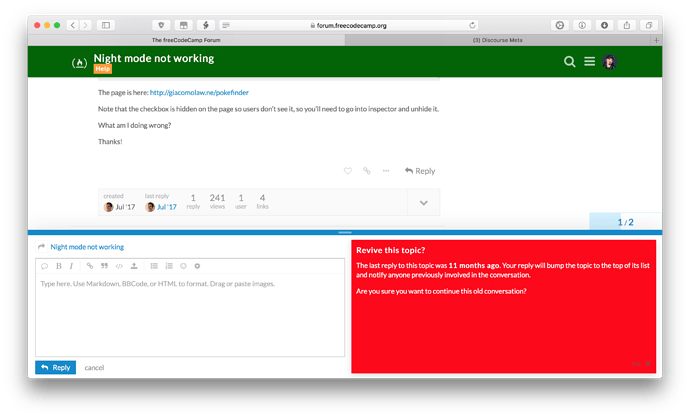 One thing that does cause this to happen is if someone [or some bot?] spams an old thread, often something that’s been dead for a year or so. Then the spam post generall gets unlisted very quickly, but the thread has been bumped by then, so we get these necro-ed threads reappearing, and if you can’t see unlisted posts, then it looks a bit wierd. They drop back down again pretty quickly, but I’m not sure if there’s a good solution this

That explanation makes a lot of sense. Didn’t know what was going on behind the scenes.

I’ve searched through Discourse stuff a bit to see if there was some solution. To me it should be a simple solution like:

OR if it can’t be reindexed at least put a notice in the thread like “This was revived because of spam. Etc”

I couldn’t find much but this really old thread seems to touch on the issue (with no given solution).