Hey fellow devs, got a complex regex (complex for me) that I need help solving. Ideally, I wish there were an easier way to solve this (like the way babel will parse this code), however I am at a point in this to where it seems like regex will be the easiest step forward.

I have a regex here and am close, but not quite grabbing what I need to:

From this document, this is what I need to match:

but you would need to trim it

You can take a look at some stuff I helped create to remove CSS comments for inspiration.

Contribute to freeCodeCamp/curriculum-helpers development by creating an account on GitHub.

Thanks I’ll certainly check it out!

Doesn’t seem to be what I’m looking for?

What is the problem anyways? Why do you try to remove them?

Imho some context would be useful.

it is close though. You just need to enclose the class name match in brackets and it should work?

ps. once I did that, I got exactly two matches in your test set:
tester-class
tester-child-2

It’s for mapping a comment to it’s nearest class as a reference to where it is in the css file. I am in the process of rewriting css files and lose the comments, so I need this regex to splice them back in after rewriting.

I see so you have one or several CSS files and want to process them (as you indicated) using NodeJS, and write that to a file as output ?

I am saying so bc you could write a longer logic and not rely on a single regex.

Sorry if I misunderstand the problem.

It’s pretty complicated at this point, but yes.

This is not a valid CSS comment. Is this really from a CSS file?

In the script.js I’d have a logic of this sort (pseudocode):

In the first 2 cases you need to keep collecting until the next closing pair, and finally, absorb the next line that is not empty.

The last one is just that single line, and the following class

Well, I only know of these comments that are next to css props, Ie:

So, perhaps the regex would change for this use case, but this touches at least 800+ files and I need to be very careful.

Yeah, I had considered just doing all different regexes and adding them to an array, too.

SASS/SCSS supports // comments so maybe that is why?

SASS/SCSS supports // comments so maybe that is why?

@RandellDawson I’ll check out your repo that you sent over and I’ll try to figure out a working solution from those regex matches. Thank you.

If you are still trying to find a working regex for it, here you go:

Thank you, much closer, however it seems to grab everything at the top as well that doesn’t have a corresponding class: 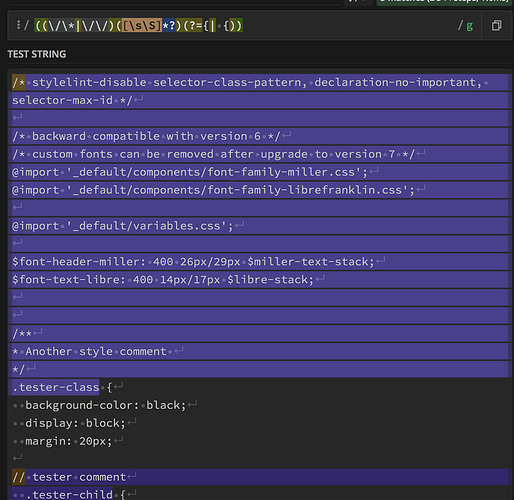