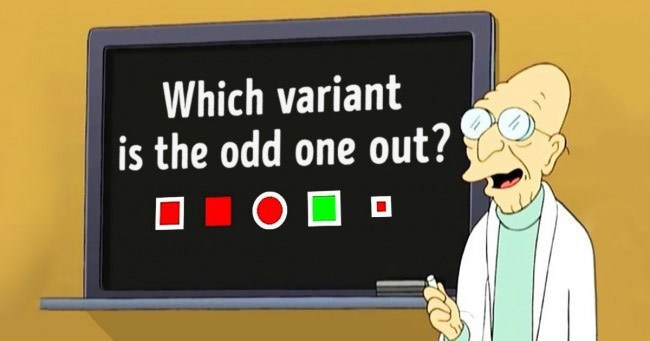 A quick Google search will reveal that the first one is the odd one out due to it having the most similarities with the other objects.

But say we remove the first item. Can you come up with a different answer that actually makes sense? How would you approach this question?

If you remove the 1st item, then the non-bordered Red box will be the odd one out.

Just because someone can invent a puzzle, doesn’t mean that there is some deep truth in them. Some puzzles are just poorly constructed.

But are all the arguments equal? In cases where they are multiple answers, none of them can stand out? Does one answer perhaps have practical value?

Some questions, particularly job interview questions, are more about the thought process than the actual answer.

Some questions, particularly job interview questions, are more about the thought process than the actual answer.

I guess if you’re applying for a front-end web dev position, then the non-bordered square is the odd one out… it’s missing a “class” hahaha.

Now, if you’re a carpenter/builder, then that circle will be the odd one. You’d need a lathe machine to construct that cylindrical rod! (assuming you’re looking at the cross section of all these pieces).

From a front-end dev point-of-view, you’re saying that border-styling tends to belong in a class. That’s one perspective.