Tell me about it…

What exaclty is “prop”, “Name” and str? And how does it connect to printing the name “John”?

“prop” is a string, as is “Name”. str is a function parameter that assumes the value you pass into the function. So for the line:

The code above is assigning a value to the variable someProp. That value is then being used to look up the associated property in the object someObj.

Do you understand what the value of someProp is after the function returns a value?

How does the code above “Name” relates / links to “Name”?

I see a propName: “John”, but I see nothing that says “Name”.

I see a propName: “John”, but I see nothing that says “Name”.

What is the value of someProp? In other words, what does the function propPrefix return when you pass the string “Name” into it?

What is the value of someProp ? In other words, what does the function propPrefix return when you pass the string “Name” into it?

Those are good questions that I don’t know. This is coming from this part of the course in this link here:

someProp would have a value of the string propName , and the string John would be displayed in the console.

Note that we do not use quotes around the variable name when using it to access the property because we are using the value of the variable, not the name .

I think you might want to revisit this challenge:

Return a Value from a Function with Return

Once you know what value the variable someProp holds then I think it will all fall into place.

someProp is supposed to have the value of “John” coming from the object, going through the propPrefix function.

I don’t see how the propPrefix funtion is tapping into the someObj.

I did the test on this section and it was simple, but this last example I am not connecting the dots… I am thinking they are replacing the actual working elements with the examples of str, “prop”, and “Name” to make it clearer, but I am just not getting it.

someProp is supposed to have the value of “John”

someProp has the value returned by the function propPrefix with the string “Name” passed into it. What is that value?

I think “Name” doesn’t have a real value.

I think they are using “Name” more like an example.

The entire code is what you saw there.

They are trying to explain how to access a value of an object.

A very short read on the entire example is here:

I understand how this works, no need to explain to me

I don’t think we can go any further until you get the value of someProp.

someProp would have a value of the string propName , and the string John would be displayed in the console.

Still don’t see how they are connected.

I totally understand all of the other examples, but this last sample is written in a different way.

To be more specific, I don’t see the connection between proPrefix and someObj…

Given that the test, and the previous sample right above this sample are way easier… I am just going to qualify this sample as a bad sample.

I am just going to qualify this sample as a bad sample.

someProp would have a value of the string propName

This makes no sense. Look at the code in the function propPrefix. What does it return if you pass in the value “Name”. That’s what the value of someProp will be and then you will see how this all fits together.

From:
Accessing Object Properties with Variables

someProp would have a value of the string propName ,

^^
That is the explanation written for this code in this part of the course. 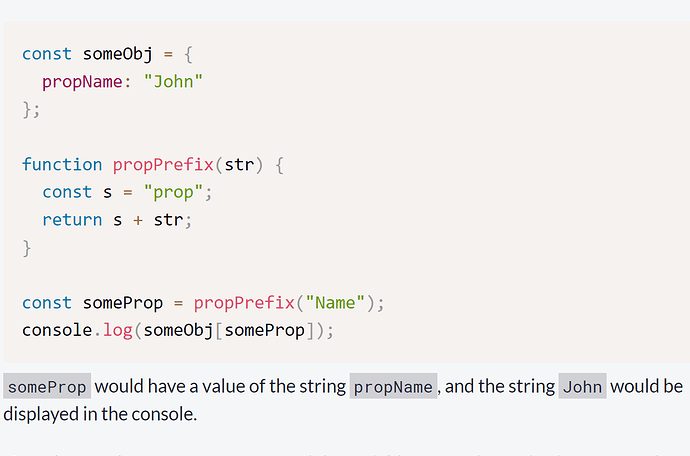 someProp would have a value of the string propName

Ahh, I see now, I misread what you said earlier. Usually, when you say a variable has the value of a string you put that string in quotes:

Is this what you meant? And if so, then can you see how

gives you the value “John”?

Yes, its getting clearer, but I am not trying too hard.

It is a non working sample with the words changed to make a sample, but the sample doesn’t make much sense because they are not using the proper words to make it work.

Why don’t they just use “propName” instead of “someProp”? Or whatever else they are not using?

Anyway… I think I am good for now… thanks…

Why don’t they just use “propName” instead of “someProp”?