Demographic data - What country has the highest percentage of people that earn >50K?

Tell us what’s happening:
I am getting the result as United States with a percent of 91.4 - which is the incorrect answer.

What country has the highest percentage of people that earn >50K?

Actually, what you’re checking is the percentage of people within people with more than 50K only… (That’s what I’ve done first)…

Won’t the answer still be the United States ? Since the number of rich earners is the highest in USA? 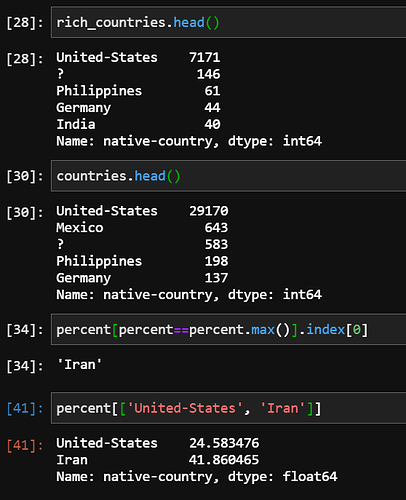 In the above snippet, rich_countries is value_counts of series containing People earning more than 50K…

Percent is calculated by rich_countries*100/countries…

From the last cell, it’s clear that Iran has higher percentage of Rich People than US(From the dataset)

thank you for the explanation… Let me try to implement that now.

any ideas on how to get it to calculate?
thanks and kind regards

Is your code throwing error?

I think you should provide the link to your project, rather than just a snippet…
You can open a new topic as this is regarding different problem.