How can i make a layout like this using background-image?

How can i make a layout like this using background-image? using css 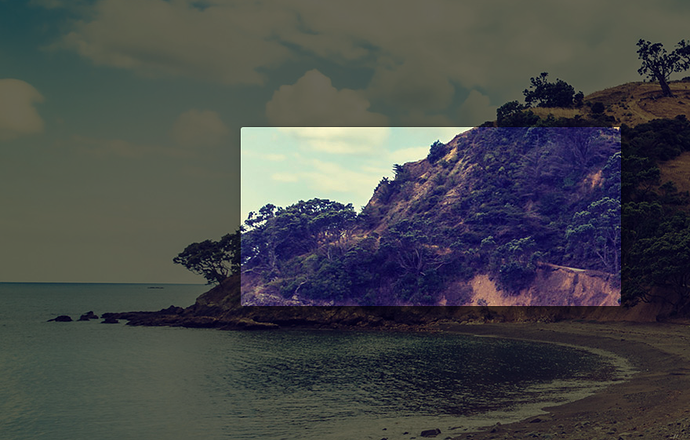 Of course you’ll have to play with the CSS shape on clippy to get what you want, but this is how you can do it.

I’ve updated the pen to show how you might position text.

Well … here is one method.

Probably a bit more involved than necessary (it requires several elements and some Javascript).

You could do without the Javascript if you fixed/pre-calculated some of the values.

This is by no means perfect, but the method that @MARKJ78 posted isn’t widely supported yet (clip paths are hidden behind a flag in Firefox, for example);

clip path is the only way as far as I know (I’m pretty much a noob tho)- as unsupported as it is. Although I suppose you could get crazy with positioning oblongs…

Should have mentioned it as Michael did. In terms of what to do… I’d probably use clip-path (i think you could probably test for it with modernizr) and as a fall back either go with some JavaScript or try and position some oblongs over background image div to make the hollow centre. I think that might give some responsivity issues though.

No worries. I didn’t look at how the initial effect was done - I simply looked at the result and considered how it might be done. With clip-paths not widely supported, the only way I could think of at the time is to use two images and then position them so that they occupy the same positions compared to the viewport, but insert one in a container so that you could size/position that and use overflow:hidden to create the “clip-path” type effect.

I added some additional styling to make it more visible, but figured the OP could always strip that out.

Without those style flourishes though, essentially the effect is the same.

I’ve updated the pen to remove the styles … and make it draggable, just for the fun of it (I’m practicing my vanilla JS - I’ve used jQuery for years for lots of things like drag and drop and positioning and this has been a good excuse to practice going without).

Codepen seems broke for me at the moment… really want to see how you made something draggable in js though, i was aware it could be done with jquery.ui but i assumed it would be pages of javascript underneath!

Yeah, it seems codepen is having load issues …

But it’s actually not extremely difficult to do drag and drop (at least, not for my purposes). I didn’t use the native implementation because that seems to be geared more toward moving elements from one container to another (drag from here then drop to there).

What I wanted was more of a move this element around when I click, hold the mouse button down and move it around. The same things as the .draggable() functionality in jQueryUI.

So, it’s built around mousedown, movemove and mouseup.

Ah! Looks like codepen is working again … for now.

Like I said in a message above, support for this feature is hidden behind a configuration flag. You need to turn it on.

I favour the last two. Of course clip-path is 10 times more straightforward, and you can do much more if you leverage svg filters (10 times more effort though). Also some things will be easier once there is support for backdrop-filter.

Hello everyone here, i have a big problem and i cannot solve it since the last year…i’ve tried to put a video inside a clip path… this is work fine with chrome and safari…but the problem that it doesn’t work fine with firefox… the page being slowly… can anyone help me plz… the code is :