Where did a and b come from and how are they getting their values? How is the return value being calculated?

I’m sure it’s simpler than I think it is, but I feel like there’s some piece of information I’m missing.

Challenge: Use the Rest Parameter with Function Parameters

Yeah, reduce confuses a lot of people. It’s also really powerful once you get the hang of it.

reduce takes an array and “reduces” it to a single value.

Let me change the variable names and reformat a little:

The final result is going to be 102 because this is the final value returned by the callback.

But see for yourself. Good developers like taking things apart and seeing how they work:

Mess around with that and see how it works.

Incidentally, this is a case where you can leave off the initial value. If you don’t pass an initial value, it will just use the first element and skip to passing the second element to the callback. Mess around with that and see how it works.

Thanks for the explanation!

I had pasted the code into VB Code and tried going through with breakpoints after I made this post.

I managed to gleam that it was adding the values up using a and b, but I think my brain got really hung-up on the initial value, since I had no idea where the ‘0’ came from and hadn’t realised it’s purpose.

Also didn’t realise I could add console logs within that part of the function. I’ll have to start messing around with that from now on to see how I can use it to explain what’s happening.

Hey, quick question about this.

What’s the purpose of breaking the function down when you write it?

It seems like it’s designed just for the purpose of adding numbers together. Why not just have arr.reduce or reduce(arr) instead of arr.reduce((a, b) => a + b, 0)?

Can it be used for other purposes as well by modifying what’s on the right of the =>?

I think this was the crux of my confusion, as it seems more complex than it is.

read this article this will give answer to you question. 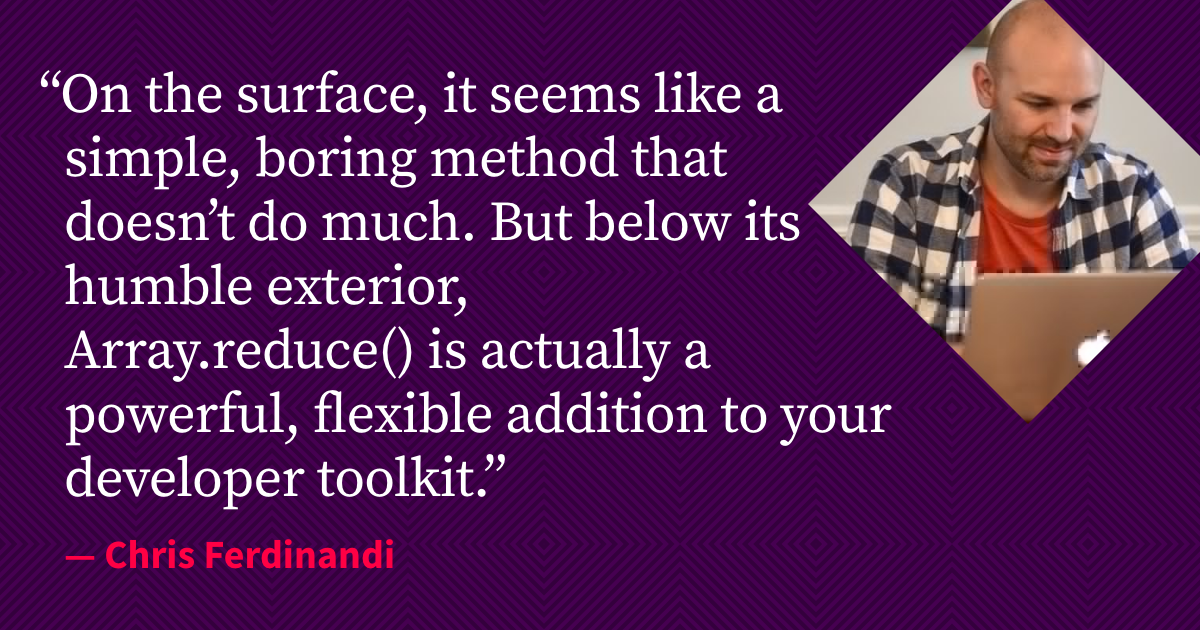 Five Interesting Ways to Use Array.reduce() (And One Boring Way)

Chris Ferdinandi turns the heat down low and lets the sauce reduce while we take a look at how to add spice to our source with a sprinkling of Array.reduce(). Just a little ingenuity with the humblest of functions.

Well, reduce is not specific to summing numbers. All it is made for is taking an array, and reducing it to a single value. We do this by passing in a callback function. Of course, we could also store that callback in a variable. Here are some example uses of reduce. Mess around with them.

That is just scratching the surface. It is really the most powerful prototype method - you can do what any of the others do and so much more. Actually, that’s a really good exercise, redoing other prototype methods like find, map, filter, etc.

The MDN docs also have quite a few use case examples.

The reduce() method executes a user-supplied "reducer" callback function on each element of the array, in order, passing in the return value from the calculation on the preceding element. The final result of running the reducer across all elements...

Ah, this makes the use cases clearer!

Thanks for the examples, and I’ll certainly play around with these exercises. Seems like it’s a well used function, so I think I need to make sure I understand it fully before moving on.

Thanks to everyone else as well for the reading material!