Hey, so I’m working through the program, and loving it so much but I am beyond stumped on this lesson.

Add a new album to the myMusic array. Add artist and title strings, release_year number, and a formats array of strings.

Since what you posted is the original code, we don’t know what you have tried to give you syntax errors or what you tried that did not provide the correct answers.

Remember, myMusic is an array holding one object (album) currently. You just need to add another album (object). Remember, that arrays have elements which are separated by commas.

You should take a look at this previous challenge:

There are important lessons within the challenge that you posted:

You need to post all the code, not just a section of it.

We should still see the original (below) with your code added in. Replace the // Add record here with the album object you created.

@ardn-jordan: Note that the elements must be comma separated.

@ardn-jordan all you need, is to add a comma between the 2 brackets (see pic).
The reading stated that UNLESS it is the last “record”
in the array, place a comma between records. Hope this helps 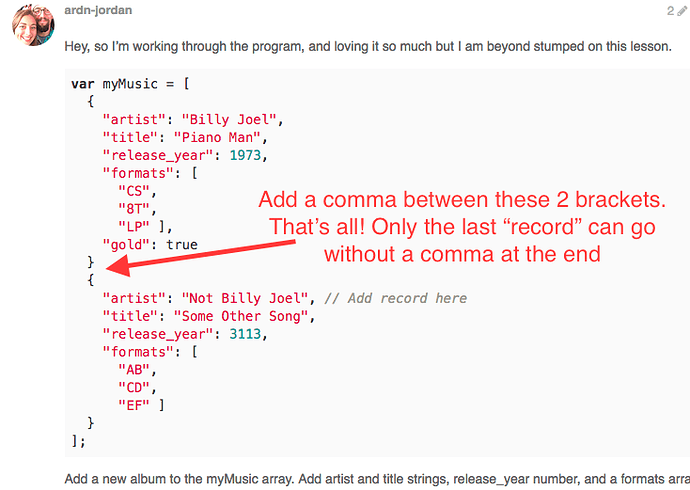