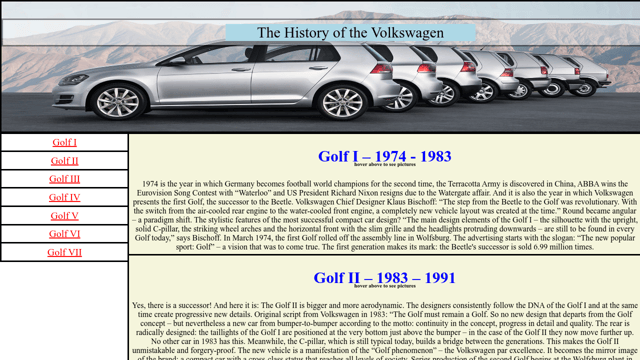 in the id .navbar i set it to sticky but i doesn t work don t know why i set the top to 0 ;
also when i hover on the titles (golf1 golf2…) i tried to make some images appear while hovering on them
i tried to set two images appear on each title but the second image won t appear
wish someone could help me thankss

thank you . so the only problem that remains is when i set the .navbar position to sticky it doesn t stick

Would that work instead?

Maybe it has something to do with that navbar div not being closed properly. I don’t know, just trying to rule it out:

My last idea is to wrap the navbar div in its own wrapper/container div. Right now it’s parent is the Body. All the examples I’ve looked at the over the past couple hours of researching have shown a parent (other than Body) wrapped around the sticky div. If that doesn’t work, someone smarter than me will have to chime in.

position of fixed should work to fix the vertical navbar. The reason why we get an empty space is because the head (i.e the image on top) also moves along with the entire content, hence creating the blank space on top of the navbar.

So, the solution could be to fix the head as well. On changing the position of head as fixed. And on removing the position of absolute of the main content (had to add margin-left of 35 rem to position it correctly), I can get the navbar to stay put as below:

well i tried but wasn t the case . thanks mate i really appreciated your support

well it is fixed now thank you so much although i didn t want for the head image to be fixed so i an get more space but the navbar is now fixed .
i will try to understand more about positioning and these stuffs before moving to javascript