Tell us what’s happening:
I originally thought the map method required both a key and a value but in this particular solution, I only see a single function following map: function (group) {
what exactly does “group” refer to? Is this function creating a brand new array and “group” refers to the newly created array? And does map always break everything down to each individual item in the innermost arrays?

Link to the challenge:
https://www.freecodecamp.org/learn/javascript-algorithms-and-data-structures/basic-algorithm-scripting/return-largest-numbers-in-arrays

The map callback function can take 3 arguments. You can name the parameters of the callback function anything you want, but the important think to understand is specific argument position determines what the argument value is. The first argument passed to the function is the element being iterated over. The second argument is the index of the element being iterated over. Finally, the third argument is the original array in which the map method was called.

what exactly does “group” refer to? Is this function creating a brand new array and “group” refers to the newly created array?

In this example code group represents each sub array of the single array being iterated over. The map method always returns a new array.

And does map always break everything down to each individual item in the innermost arrays?

Not exactly sure what you mean by “break everything down” here. The map method allows you to access each element in the array and return a new array with “modified” elements.

Not exactly sure what you mean by “break everything down” here. The map method allows you to access each element in the array and return a new array with “modified” elements.

will the map function whenever it’s used anywhere always return a new array?

The map method always returns a new array with the same number of elements as the original array. The only thing that may change is the values of the elements.

It’s a loop, group is just the name of the parameter the function that gets ran has, it could be called anything

Then it goes through the array you called it on, arr, item by item. However, since you’re only using a single .map(), it’s not looking at your nested array. It’s only concerned with the outermost array, which has 4 groups of numbers, each nested in its own array.

In the map function, arr.map(function (group) { do this to each item in the outermost array }, .map() is calling .reduce() on each of the four groups.

Then, .reduce() is doing its thing, finding and returning only the largest number of each group. After that, .map() tosses whatever it gets back into the array it created.

So, in the end, .map() is going to return the new array it created first, still with 4 items. .map() doesn’t care what those items are, so long as there are 4 of them. .reduce() is the one determining what those items are in this situation: arrays with only a single number.

If you wanted to use .map() on the nested arrays, you would have to call it on the groups inside the outer .map() call:

okay, so for this first line:

tells the function that we’re mapping whatever is inside this array. Could be six items, could be ten. But for our purposes, there are four items in this array. So .map will also expect to have 4 items, which we don’t know what exactly yet so it just is an empty array at this time []. I guess group doesn’t necessarily have to refer to an array, but it does here.

We’re calling reduce on group, so now the function expects to compare at least two elements to each other and only one champion will survive. I wonder if you can simplify this next part into arrows…
Anyway, this particular reduce method uses two parameters prev, and current, but we don’t know exactly what either of these do yet.

Always a pleasure to meet another HK fan in the wild.

Mapping and reducing are two commonly used operations in functional programming. While mapping isn’t a concept that always relates to arrays/lists or collections in general; reduce totally relates to them and sometimes you can “reduce/fold” not only a collection but also a Stream (a concept of “values that come over time”) or a Signal; an asynchronous channel or mailbox messages in actor-based or go-loop-based languages such as Go/Elm/Elixir.

Since we’re specifically talking about JavaScript, and .reduce/.map are both only implemented as array methods, I can explain try to explain them in both contexts. Also here’s a quirky image I found on twitter:

1- The parameter “group” refers to each individual sub-array in the larger array (arr)
2- Yes and no. The map is creating a brand new array, but “group” does not refer to the newly created array, but rather —as explained above— to each individual sub-array that you receive in the callback function to be later transformed into a single number (the maximum value of that sub-array).
3- No, “map” does not “flatten” innermost arrays, map doesn’t know anything about matrices or innermost anything. It just takes an item from the operated array and sends it to a callback function for it to be transformed; it just so happens that each individual item also happens to be an array; mere coincidence.

Read the following stuff if you want to learn new things and listen to my rambles:

The concept of mapping comes from mathematics where it means going from one value to another value (potentially the same). A function (in math) is even described as the mapping of an input value x (or more, in multivariable calculus) to another output value (after evaluating that function with the provided value or values).

Note: They are also called morphisms in category theory 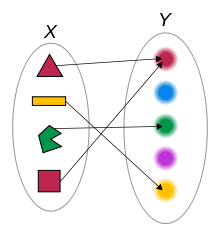 So as you can see, in functional programming mapping is used for a thing called Functor which is just a contextual container with different behaviours. For example, mapping a “box” is just opening the box, retrieving what’s inside, applying a function or “transformation/mapper” to it, and placing the result inside the same (or a new box of similar type/context; it really depends on the implementation) container. In JavaScript, when you map over an array, you’re not changing the original array, you are returning a new one.

An array happens to follow the functor rules, and thus, you can “map” over it, but as it turns out, an array is a container that contains multiple values. Naturally, when mapping an array, all the elements inside it change; which means, the same mapping function is applied to all the values and placed back in the same order.

As to why the JavaScript array implementation of map receives 3 parameters? It’s just because it facilitates the following items:

Why are they all optional? Because even if you omit the current item parameter, you will still map each element to whatever your mapping function returns. Now, is it common to omit the first parameter? Not really but it has its uses, I may have forgotten about real use cases but here’s an example:

As you can see, you never get to use the _item parameter, and it’s a convention to use an underscore for unused parameters in functions.

This is harder to explain, it’s such a mindbending concept for beginners but it can be explained as taking a collection or stream of values and producing a single value from them. In arrays, it just means to consume all of the values to produce a result of any type.

The reduce method of the Array prototype in JS is used for many things, even for creating an object or another array. Did you know you can also define map and filter in terms of reduce? A wild world we live in, rite?

Some languages may refer to this as “folding”, from the left or the right. The reduce method in JS is a left-associative folding operation because it goes from left to right (referring to the elements in the array) and the order of the parameters in the reducer (the function you pass to it).

The “reducer” is a function with 2 obligatory parameters:

It also takes two extra parameters (optional): the index of the current element and the original array.

In hardcore FP, the initial value is called “z” and it’s usually always required to prevent crashing the program. This initial value sometimes falls in line with what we call an “identity” in category theory.

An identity is an element in a monoid (another weird concept) that when combined/concatenated/applied to another element of that same semigroup will leave that other element or value unchanged. Examples?

Notice how AND being “product” and True being its identity is similar to 1 and true being the same thing? Same with OR and addition with a common identity of 0/false.

Division, subtraction and equality do not fully comply with the monoid (lack associativity) rules so they’re not technically monoids.

Among many many other cases… (notice the use of reduceRight, which folds from the right up to the leftmost element).

The object and array composition/assoc identities can be used in javascript but in a different way: to build an object or an array from an existing array. For example, a common use case for object building with reduce is to count the number of times each element of an array appears in it (frequency of occurrences). You can accomplish this: