I have not used json files as of yet, and I am curious on how to get the information out of it. I understand how to parse it which turns it into a javascript object, and then I can use that to populate what I need. However, all the examples I looked at they were creating a string in JavaScript and then turning that into the object.

I’m not sure I understand your explanation of the examples you found. The best way to get answers about things is to show us the code, such as pasting it in here or giving us a link to it.

For example the person on this example said " have saved a JSON file in my local system and created a JavaScript file in order to read the JSON file and print data out. Here is the JSON file:"

Then they do this to parse it into an object

So, they have a json file, but they copy it to a variable and then parse the variable. Im just thinking it would make mor sense if there was a way to get the information directly from the file and parsing it that way? Instead of copy and pasting the information in

OK, I think perhaps I found the source of your example?

How to read an external local JSON file in JavaScript?

“This is not a correct answer. The example in the answer is not loading a json file. It is actually just loading another javascript file which stores some hardcoded json as a variable named data .”

This is exactly right. There is nothing wrong with doing this if it works for your situation. But it is not technically reading a local JSON file.

To answer your question, yes, there are other ways to read in a JSON object without storing it as a string. I think we need more detailed information on just exactly what you are trying to do. Is this a web application or are you running your JS through node? Is this a user initiated process (i.e. the user can pick the JSON file they want to load) or is this done automatically by the application?

I will do my best to explain. I have a .json file that looks like this

I am attempting to do the challenge 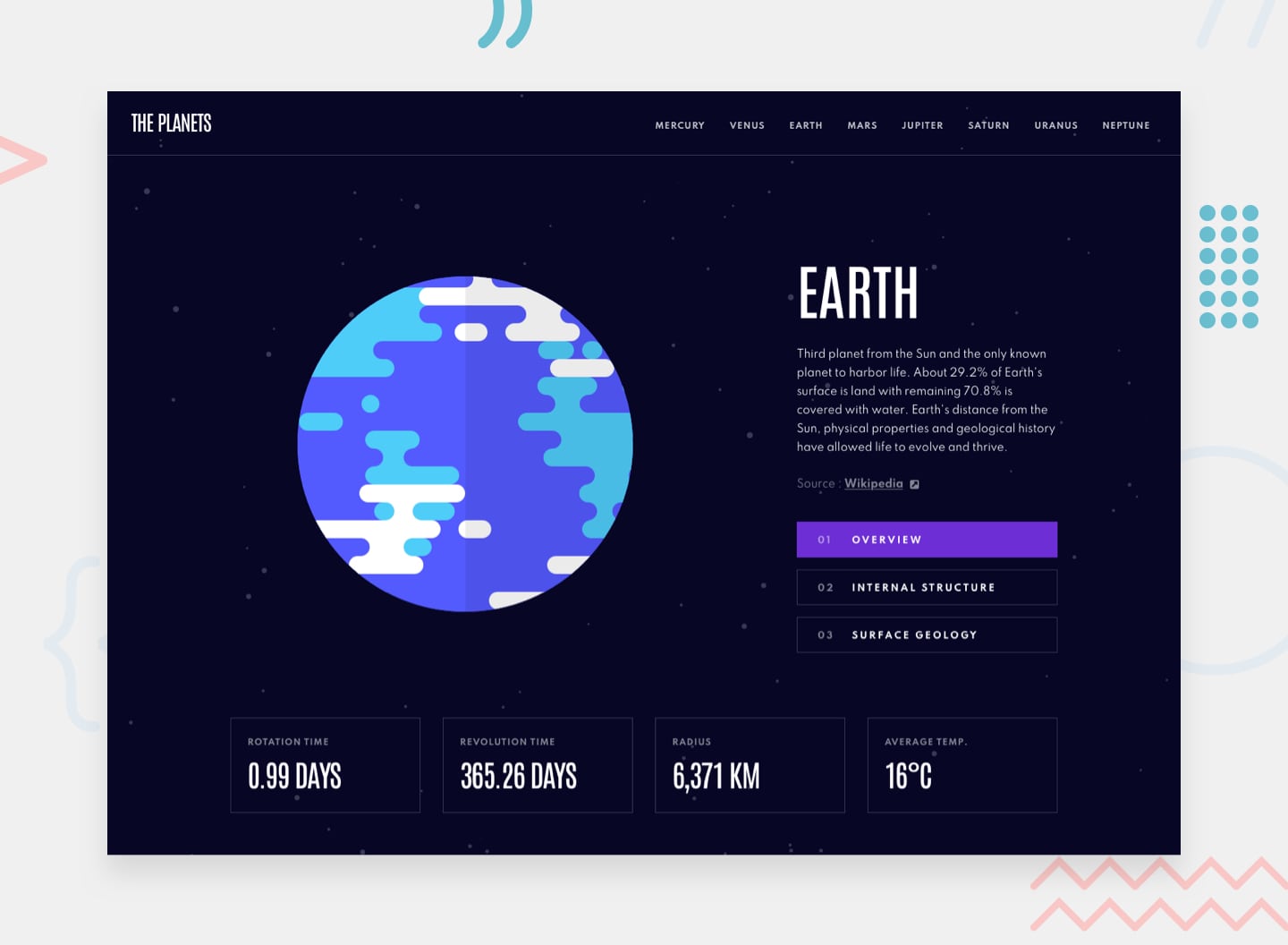 In this challenge, you'll be building out an 8-page fact site for all planets in our solar system. This project will make an incredible portfolio piece when completed!

You can see there are three buttons on each page, and I am assuming that for each button clicked there is specific information from the json file that get displayed. I do not have any code for it yet as I am trying to get through the thought process first.

I looked some more, and it looks like I will have to use the fetch api. I guess I will need to figure out how to put my code on a server to do this?

fetch is definitely one way to do this. As long as the json file is publicly available on a web server then you can fetch it and read the contents into a variable. But this may not be the only alternative. Are you going to use a framework to build this app? Or are you sticking to purely vanilla JS?

Are you allowed to change the json file? A relatively easy way to import this data would be to add an export statement at the beginning of the json file:

Then you could import it into your main JS file:

And planets would hold the array of planet information defined in the json file.

To use this method, make sure to add type="module" to the <script> for the JS file that is doing the import. Also, you have to serve the html page through a web server, you can’t just open the file in your browser through the local file system. But this is also the case if you use fetch.

Are you allowed to change the json file?

I don’t see why not. As long as I am not copying some ones code, and trying to use it as my own it should be fine. They encourage to try new ways to get things done.

I found a live server extension for visual studio code when I was looking at the fetch.

To use this method, make sure to add type="module" to the <script> for the JS file that is doing the import

Just making sure I am on the same page. That would be the main page for each planet correct. For example. I would have an earth.js, mercury.js, and so on so it would look like

Yep. If the JS file needs access to the JSON data and you want to use import technique above, then the <script> tag must include type="module".

Thanks! I will start on it tomorrow. Appreciate all the help

So, the json file does not like the line

it gives me the error “Expected a JSON object, array or literal.json” on export

That’s not JSON, so no, it will not like it. JSON isn’t a programming language and doesn’t know anything about JavaScript, it’s just way of transferring data by writing it in a very specific format. The contents of a JSON file have to be JSON.

Note that following will work in Chrome (was enabled by default in December), will work everywhere soonish (normal caveat, uses ES modules, script tag in HTML file must have the type attribute set to “module”, has to be run on a server, won’t work by just opening the HTML file in a browser)

Awesome! Got it working