I was able to solve the supplied problem, but I felt like I cheated because I used the a caret and dollar sign at the beginning and end to specify I only wanted 3 or more matches of digits. I believe the solution FCC was looking for was different. Anybody else have different solutions?

Use capture groups in reRegex to match numbers that are repeated only three times in a string, each separated by a space.

Try testing with one of the online regEx testers like https://regexr.com/

I was able to solve the supplied problem, but I felt like I cheated because I used the a caret and dollar sign at the beginning and end to specify I only wanted 3 or more matches of digits.

You didn’t cheat. The specifications are the tests, and their point is to tell you when you are right. Since there’s no one way to accomplish something with code, tests are the only reliable method.

Besides, barring some crazy regex pattern, you wouldn’t be able to accomplish this task since it’s just repeating numbers. And the regex engine is greedy (it will match as often as possible).

In a real world scenario you’d probably just return an array of results and verify the number of matches you want there.

Hi, how is the solution above different to this one:

This one works too.

Hi, how is the solution above different to this one:

It’s actually not different. It just looks like it.

This should probably solve your confusion:

Since there we need only 3 repeated pattern here:
The initial regex will look lilke: /(\d+)\s\1\s\1/
But this will match 4 numbers also.

For solving that we can use: ^ and $ at the start and end of regex respectively.

What this says is it will match only a string which matches a string starting from a number and end on 3 numbers separated by space.

Right, so you do not need two sets of parentheses as the question clearly implies. The wording is misleading. You need one set of parentheses (1 capture group) that gets used 2 times?!

Also, FCC someone, please answer this: the carat and dollar sign? How is this solution so very different to the example given in the question, because that does almost the same but using words instead of numbers.

@chris-isnofun I struggled with this too and also tried using 2 groups, even 3 groups 2 with a space and a final group with no space to signify the end of the white space sequence, faffed around with it for ages, then had to resort to the forums, and tbh I still don’t really understand the answer… i get the beginning part:(\d+)\s\1 the group were matching, but then i don’t understand how this translates to check for the group 3 times \s\1$ what if the challenge was different and we wanted to check 4 times, or just two times?

So, let’s take your regular expression as an example, and break it down.

So we match the original number with (\d+), and then we match it a further two times using \1. In total, that makes us look for three matches of that number, with spaces \s between each of them. Does that clear things up?

@joker314 thanks for this, yes it does, i thought the \1 was to signify the group you had just created was sort of being closed off at this point! not refering back to it!.. i don’t think the challenge information explains this clearly enough!!

your broken down version was great…

Amen, to that! The example and challenge gap is growing with every challenge.

As far I can tell, the following regex will pass:

However, that’s only because of the limits of the test statements. The actual question asks for a regex that will match three consecutive numbers (all the same, separated by a space) in a string, but only when it’s three consecutive numbers, not four or five etc. I’m interpreting that correctly right? If so, the regex should be able to pick out the ‘42 42 42’ in the following string:

BUT the regex above (blurred) won’t do that, will it? Because it only matches when the string starts and ends with the repeated number (e.g. “42 42 42”). Thinking about it, what we want is a regex that looks more like:

So my question is, is there a way to write the negative of the capture group? Because that’s what’s needed to go at the beginning and end, no?

Apologies if none of this makes sense or if I’m missing something obvious, I’m the definition of a noob at all this.

thanks for the break down 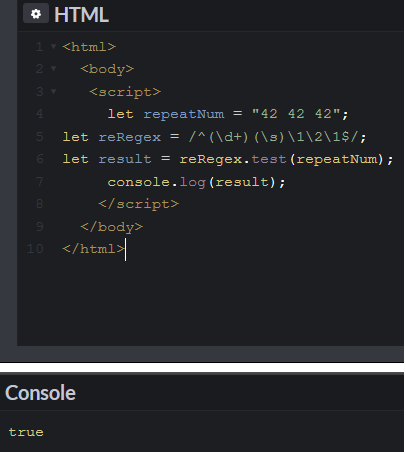 I’m not sure what the difference is between the above and the accepted solution.

I’m enjoying the challenges so far.

write the negative of the capture group

Yeah, this is possible! But not before you’ve defined the capturing group. And that’s the problem. (you’re absolutely right!). This regular expression is impossible to create in JavaScript, and the question’s wording is misleading. I tried to confirm this on Gitter. I was banned from the Gitter chat before receiving a confirmation.

(warning: this is an incredibly one-sided brief perspective of what happened!)

Anyway, you can use something called a negative lookahead if you’ve already defined the capturing group.

The above regular expression uses the negative lookahead, it says “assert that \1 does not match here”. The ? means “these brackets do not mean a capturing group”, and the ! means “negative”, i.e. match the opposite. You could use a = instead, to mean “positive”.

So, the above regular expression will match some things yet not others:

But you’re absolutely right – if you try the following, your Regular Expression will not match. The task, as worded, is not giving you inputs in a regular language, and hence it cannot be parsed by a regular expression.

Nice catch! Maybe an issue in the non-free GitHub issue tracker would be a good idea, since it would clear it up for folks trying to follow the wording rather than tests.

The relevant repository for the wording of challenges is freeCodeCamp/curriculum.

ahhhh you’re a gem. Thanks so much for this.