I have to admit that this has my brain in knots. I have a recursive backtracking algorithm which works but I don’t fully understand why it does. I’ve yet to find an explanation (which I understand) of exactly how the recursion and backtracking code works in practice. Can anyone explain in simple terms how the following solve function actually works?

We have blurred this solution so that users who have not completed this challenge can read the discussion in this thread without giving away the solution.

I have moved your question to its own thread as the post you were responding to was quite old.

Well, going through your code I found a few things that are a little confusing so not going to explain your exact code and what it does, but here is the basics…

The beauty of recursion is that you just handle a little piece of the problem, then recall the function to handle the rest of the problem.

So in the Sudoku solver, this is done by calling your solve function recursively… It’s a pretty messy thing to explain in english, but basically the steps look like this:

Its a very brute-force attack, trying many different possible combinations until it finds one that works… to illustrate this maybe more clearly lets look at a simpler example such as a combination solver.

Say we want a program that will find the correct 3 digit combination to a safe… say the combination is 352… and you can’t repeat the same number twice, like 111, and can’t use 0… we’ll use 0 to represent an empty spot like in your Sudoku.

So using the same kind of solver as illustrated above we will follow the steps:

This will continue up to 129… at which point its tried all workable numbers and didn’t solve the puzzle. It will return false for incorrect answer, and return false since it tried every number unsuccessfully, backtracking us back to where you called solve on 100, and will try the next number in the next empty slot, so 130. Solve on 130 will keep going until it tried every number up to 139… and when that doesn’t work, it will go to 140. When it gets to 198 and still doesn’t have an answer, its tried every number in the second and third slots unsuccessfully, so now will return false all the way back to the solve you called on 000… at which point since solve 100 didn’t work… it will try solve 200. This will continue in this fashion until it gets to 352 at which point the since it found a correct answer, it will return the answer(instead of false), which will return the answer, which will return the answer all the way back to your original call of solve (this is why a call to solve either returns false, or the completed puzzle).

Very brute-force, but if there is a valid answer, it will find it. In this example it checked if the combination was right after there are no remaining slots, but in your Sudoku solver, it will backtrack anytime it gets to an empty square that it can’t assign a 1-9 because it conflicts with other cells already assigned.

It’s actually fun to watch this method at work… in your Sudoku solver, you can watch how it works by printing your grid string to console every time you assign a number to the grid (warning: this will print thousands of lines to your console). You’ll be able to watch as your program fills in the grid, usually almost completely, before it hits a conflict and has to backtrack sometimes almost all the way to the beginning to try the next number. Very interesting… or maybe I’m just easily entertained.

I hope this helps a bit. It’s late, so this might just be incoherant babbling.

Here’s how (I think) it works:

Let’s say that there are no possible values for second empty cell given the value we’ve assigned to the first cell.

I don’t understand step 4. All I know is that the function doesn’t work without it.
What am I misunderstanding?

I didn’t go deep enough into the recursive loop in my head.
If a valid value were found for solve2 but then not for solve3, and then revisiting solve2 to increment to find a second alternative valid value fails, we need to reset the solve2 value, so that we can then go back to increment solve1 and revisit solve2 afresh.

Picking up on the discussion in your original thread on this topic, the idea of gold-plating is one which I find interesting in this project.

My project solution fulfils all necessary criteria and passes all tests. For any valid submitted string a solution will be found (if the string is solvable). The brute force algorithm and validity checks are flawed in many respects though.

Obviously, some of these improvements would render the project a fail within the given FCC constraints, so it’s something to revisit after successful project submission.

Hello @igorgetmeabrain,
Where is the rest of the code? ( I’m getting a
Unexpected token '{' and let emptyCell = this.findNextEmpty(grid) is not a function when I try to execute the code).

Can anyone explain in simple terms how the following solve function actually works?

When you don’t understand what the code is doing, you can use a debugger or Python tutor: 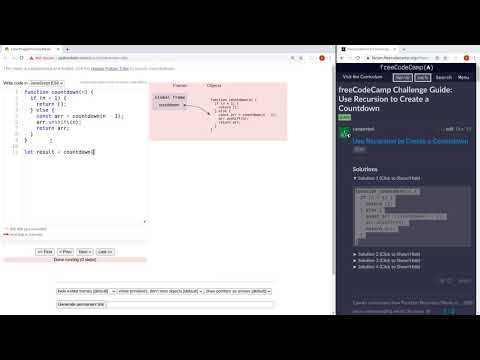 As you can see, Python tutor is more “visual”.

In general, when this happens it is because there is an incomplete mental model of how JS is executed. A step by step execution is a good idea when do you don’t understand the code, this is an answer that I wrote about recursion (a different exercise). Maybe can help you:

Use Recursion to Create a Countdown - Understanding - #3 by Diego_Perez

Where is the rest of the code?

Yeah, I didn’t include the code for the other functions. I tried to annotate to show what they return, so that the solve function could be understood in isolation.

Thanks for the advice - always happy to learn as much as I can from other people!

Python tutor is the name of the app, if you watch the video you can see that the code is JS. Also the the answer (for the recursive exercise) was created using python tutor.