Technical documentation issue: my code has been showing error since yesterday and don't know how to fix it

HTML (HyperText Markup Language) is the most basic building block of the Web. It defines the meaning and structure of web content. Other technologies besides HTML are generally used to describe a web page's appearance/presentation (CSS) or functionality/behavior (JavaScript).

"Hypertext" refers to links that connect web pages to one another, either within a single website or between websites. Links are a fundamental aspect of the Web. By uploading content to the Internet and linking it to pages created by other people, you become an active participant in the World Wide Web. HTML uses "markup" to annotate text, images, and other content for display in a Web browser. HTML markup includes special "elements" such as

and many others. An HTML element is set off from other text in a document by "tags", which consist of the element name surrounded by "<" and ">". The name of an element inside a tag is case insensitive. That is, it can be written in uppercase, lowercase, or a mixture. For example, the tag can be written as So what is HTML?

HTML is a markup language that defines the structure of your content. HTML consists of a series of elements, which you use to enclose, or wrap, different parts of the content to make it appear a certain way, or act a certain way. The enclosing tags can make a word or image hyperlink to somewhere else, can italicize words, can make the font bigger or smaller, and so on. For example, take the following line of content: My cat is very grumpy

If we wanted the line to stand by itself, we could specify that it is a paragraph by enclosing it in paragraph tags:

My cat is very grumpy

Anatomy of an HTML element

Attributes contain extra information about the element that you don't want to appear in the actual content. Here, class is the attribute name and editor-note is the attribute value. The class attribute allows you to give the element a non-unique identifier that can be used to target it (and any other elements with the same class value) with style information and other things. An attribute should always have the following:

Note: Simple attribute values that don't contain ASCII whitespace (or any of the characters " ' ` = < > ) can remain unquoted, but it is recommended that you quote all attribute values, as it makes the code more consistent and understandable. Nesting elements

You can put elements inside other elements too, this is called nesting. If we wanted to state that our cat is very grumpy, we could wrap the word "very" in a

element, which means that the word is to be strongly emphasized:

You do however need to make sure that your elements are properly nested. In the example above, we opened the

The elements have to open and close correctly so that they are clearly inside or outside one another. If they overlap as shown above, then your web browser will try to make the best guess at what you were trying to say, which can lead to unexpected results. So don't do it!

Some elements have no content and are called empty elements. Take the

element that we already have in our HTML page:

This contains two attributes, but there is no closing

tag and no inner content. This is because an image element doesn't wrap content to affect it. Its purpose is to embed an image in the HTML page in the place it appears. Anatomy of an HTML document

That wraps up the basics of individual HTML elements, but they aren't handy on their own. Now we'll look at how individual elements are combined to form an entire HTML page. Let's revisit the code we put into our

the element. This element wraps all the content on the entire page and is sometimes known as the root element. Images

Let's turn our attention to the element again:

As we said before, it embeds an image into our page in the position it appears. It does this via the src (source) attribute, which contains the path to our image file.

We have also included an alt (alternative) attribute. In this attribute, you specify descriptive text for users who cannot see the image, possibly because of the following reasons:

The keywords for alt text are "descriptive text". The alt text you write should provide the reader with enough information to have a good idea of what the image conveys. In this example, our current text of "My test image" is no good at all. A much better alternative for our Firefox logo would be "The Firefox logo: a flaming fox surrounding the Earth." Try coming up with some better alt text for your image now.

This section will cover some of the essential HTML elements you'll use for marking up the text.

Heading elements allow you to specify that certain parts of your content are headings or subheadings. In the same way that a book has the main title, chapter titles, and subtitles, an HTML document can too. HTML contains 6 heading levels,

, although you'll commonly only use 3 to 4 at most:

elements are for containing paragraphs of text; you'll use these frequently when marking up regular text content:

Add your sample text (you should have it from What will your website look like?) into one or a few paragraphs, placed directly below your

For example, if we wanted to turn the part of the following paragraph fragment into a list

Links are very important, they are what makes the web a web! To add a link, we need to use a simple element

"a" being the short form for "anchor". To make text within your paragraph into a link, follow these steps:

You might get unexpected results if you omit the https:// or http:// part, called the protocol, at the beginning of the web address. After making a link, click it to make sure it is sending you where you wanted it to.

Add a link to your page now, if you haven't already done so.

In order to make helping you as easy as possible we really need a link to your project (a link to the codepen or wherever you are hosting it). 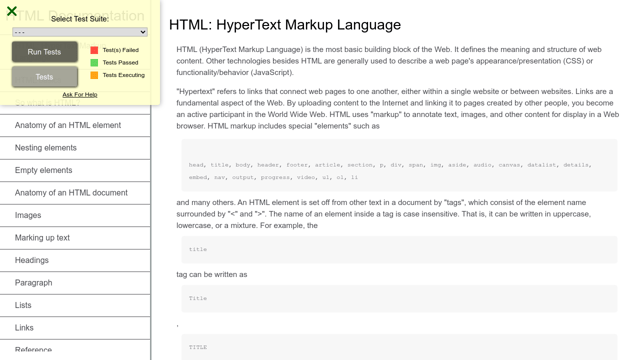 Yes, what bbsmooth says. If you’re building it locally, a git repo would work too.

And if you want to post code, please surround it with backticks so it shows properly, three on the line before, 3 on the line after:

Like that. You can use a single backtick for inline code.

Thanks for the link. Now we need to know what specific error you are referring to.

I can’t even run any test to know the exact issue, I don’t know maybe I made mistakes with the tags or whatsoever

I typed all the code and content inside my Google docs, then I copied it and paste it to codepen.io when I get done with it in Google docs

Have you done the previous projects yet? If so, did you add the FCC test suite to them?

I guess that’s where issue came from, I was uncomfortable to type in codepen.io that’s why typed everything inside Google docs

Yes. I done the previous project and passed all the test

I typed the last three project tags and content inside codepen.io

As was mentioned in your survey project, when a test fails click the red button to see which test(s) are failing and text to help you correct the issue.
Be sure and read more than just the first line of the failing message. The ability to read and comprehend error messages is a skill you’ll need to acquire as a developer. Ask questions on what you don’t understand.

On a side note, you really need to be using HTML entities and not the tags when you reference them in your doc.

OK, you’ve got the FCC test suite included in the project properly, I believe the issue is with your HTML. The test suite is not adding to your project correctly because you have a lot of HTML errors.

Using the <code> tag does not mean you can use other tags inside of it for display purposes. If you want a tag to show on the page without being interpreted by the browser as being an actual tag then you have to switch out the less than and greater than signs with their HTML entity equivalents, which are &lt; and &gt;.

So if you want the <title> tag to appear on the page then you have to code it as &lt;title&gt;. You’ll probably have to fix all of these issues before the test suite shows up.

Okay. Am gonna try that

I unable to run the test suite that’s why I didn’t find the issue. I guess something is wrong with some tags in the document