Hello, just finished my tribute page and ran it through W3. Still has some errors and would love some feedback on what the errors mean, Im a bit confused. Any feedback would be greatly appreciated. 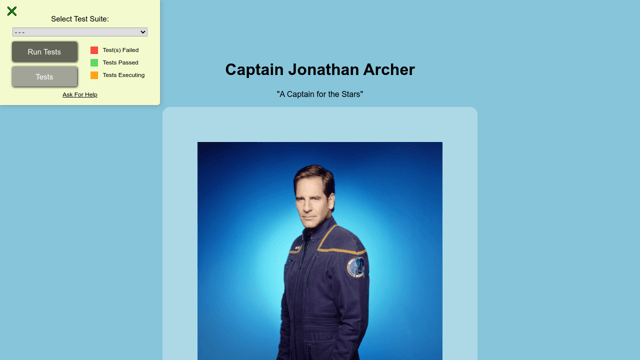 Welcome to the forums @Maide. Your page looks good.

ran it through W3. Still has some errors and would love some feedback on what the errors mean

The first two errors (expected DOCTYPE and head missing child element of title) you can ignore. Codepen provides the boilerplate for you and those are included.
Have you researched to find out what the other errors mean? The ability to read and comprehend error messages is a skill you’ll need to acquire as a developer.
for instance,

Any feedback would be greatly appreciated.

Thank you! I’ll review the lessons for a refresher and improve the css portion.

Hi,
I’ve gone ahead and fixed / modified the code. The only error I get is that figcaption is not allowed as a child element of div. Here is the section of the code:

I know it would be as simple as moving the figcaption outside the div but why cant it be part of the div?

I know it would be as simple as moving the figcaption outside the div but why cant it be part of the div?

Not be snarky, but because we say so. Or more accurately, because that is part of the HTML standard. Quoting from the MDN docs:

The <figcaption> HTML element represents a caption or legend describing the rest of the contents of its parent <figure> element.

Right there it’s telling you that its parent must be figure. Then later:

Permitted parents : A <figure> element; the <figcaption> element must be its first or last child.

So, I guess the real answer is, because that’s what the people that designed HTML decided. It does kind of make sense though - it is attached to that figure, it is a caption of that figure… Why would we put it somewhere else, if for no other reason just to make it easy to tell to which figure it belongs.

You asked me to take a look at your page…

All in all, it looks good. I see that you fixed some of the earlier comments - good.

I agree with the comments on the text width - like I said 50-75 chars is a good limit and you’re well beyond that. There’s a reason why newspapers don’t run their text lines from edge to edge but instead break them up into columns.

Also, at least the first image took a long time to load. In the real world, you’d probably work that photo down to something with a smaller file size. But there isn’t much you can do about in this case because we’re on codepen.

Just as a visual thing, I would probably round the corners a bit on the images and the “frames”. Even just a few pixels can make a big different, subconsciously. I just don’t like sharp corners.

But still, it looks good. Have fun on the Survey Form.