I’m trying to write a basic function to “scramble” (rearrange the letters of) a word. My thinking was to:

I’m realizing that a while loop might have been a better choice to accomplish this, but to start with, this idea is not working, so I’m wondering why this isn’t functioning:

Here’s an example of what the console says. 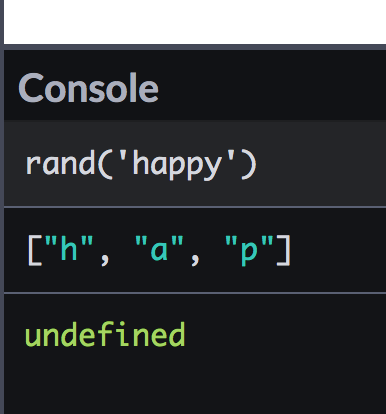 What you can try is instead of using wordArr.length 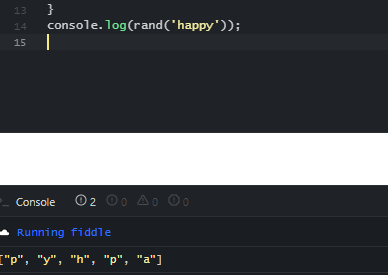 there is the result.

What’s j and why are you incrementing it in this example?

Btw, strings are iterable objects, so you can do this:

Owh, I didn’t even noticed that he didn’t declare those variables.

But you still have to declare it as a variable. You can use let so it become a local block variable. ex:

You still have to declare it as a variable

This will turn the string into an array?

@Catalactics Thanks I see that error now. But why did it still work?

@El_Escandalo, I don’t really know how it works, I tried it on a different code and it also works, I don’t understand , maybe its just a built in feature? But still always declare it as a variable.

This will turn the string into an array?

Yes, it is saying “take the characters of this string and insert them one by one into a new array”. The Fisher–Yates shuffle is an algorithm for generating a random permutation of a finite sequence—in plain terms, the algorithm shuffles the sequence. The algorithm effectively puts all the elements into a hat; it continually determines the next element by randomly drawing an element from the hat until no elements remain. The algorithm produces an unbiased permutation: every permutation is equally likely. The modern version of the algorithm is efficient: it takes time proportional to the number...

How to randomize (shuffle) a JavaScript array?

As far as I understand you need to iterate through the array until its length is greater than 0, if you’re incrementing j this condition will break.

This will be sufficient enough for such loop:

Of course this way would be somewhat more readable and less confusing: