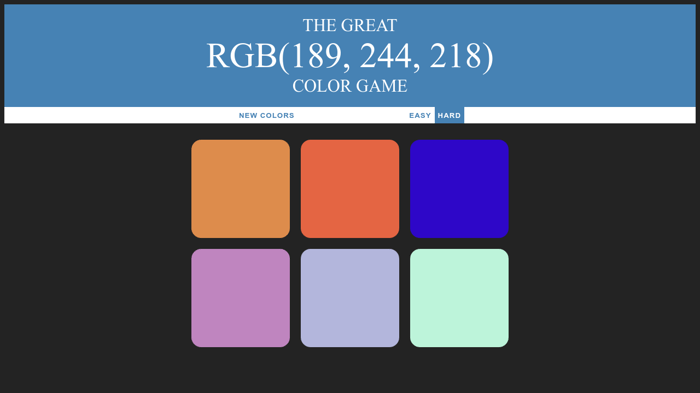 Hey guys, I’m trying to figure out where the white spacing between the Easy and Hard buttons is coming from. I inspected the element with google chrome and it doesn’t look like there is any margin on either of the buttons, and setting margin to zero doesn’t solve the issue.

Put both your buttons on one line.

Yes, as Rane says, when you put them on separate lines in your HTML, the browser sees that as whitespace that gets translated to a space character when rendered to the screen, so essentially you are unwittingly putting a space between them.

… in your HTML should fix it.

a bit of a hack, but a negative margin-left on the Hard button works

Thanks for all of the replies. I put both of the buttons on the same line and it all works now.

I liked the game. I forked your pen to play around with the javascript and came across something when fixed made the game look better. I think your intent was to have the 3 bottom squares only show when the level selected was HARD. I noticed you had a class called invisible in your css, but you were referring to a class called hidden in your resetGame function. I changed hidden to invisible and it works as you probably originally intended.

I also refactored your fillArray function (shrinking it and removing some repetitive code) FROM:

I am working on a way to simplify the toggling between the EASY and HARD buttons. I will post back here when I figure out a solution with less code. I am glad you posted this in the forum, because it gives me practice at refactoring existing code.

Thank you! This project is actually from Colt Steele’s Udemy course. I veered off of his instruction quite a bit but the idea and design was originally his.

Either way, it should now work as intended.